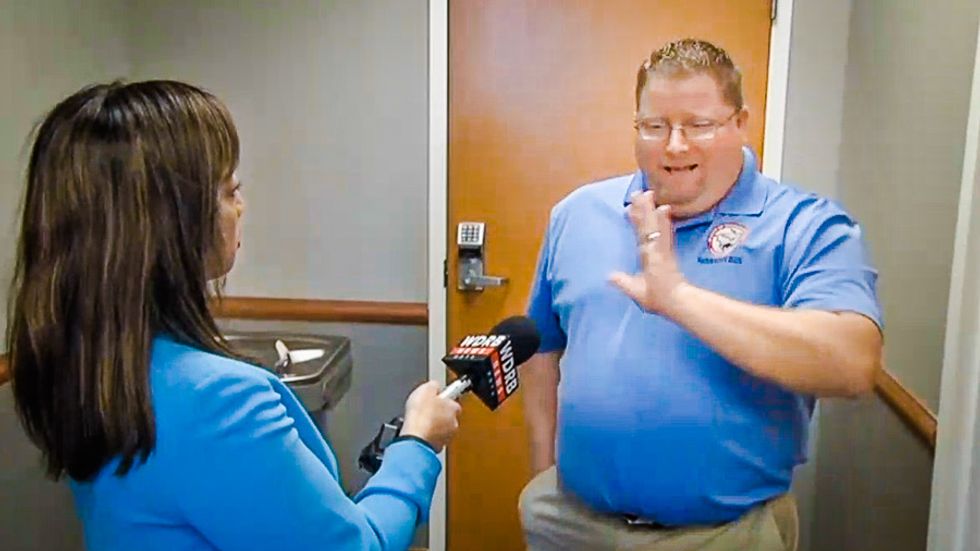 Evidence uncovered this week showed that Kentucky prosecutors dismissed charges against Shepherdsville Mayor Scott Ellis even though he had admitted helping a parolee in exchange for sexual favors.

Prosecution documents obtained by WDRB include 2014 Facebook messages where Ellis says he will obtain a pardon from then-Kentucky Gov. Steve Beshear for the woman's drug conviction.

In another message, Ellis complained that the woman was asking for things without providing sexual favors in return.

“We haven’t had any trade offs the last two times," he said.

“I know I’m sorry,” the woman said in her reply. “How about we try to do something on your lunch break?”

According to investigators, the woman performed oral sex on Ellis in his office. In exchange, he provided money, favors and promised to have her pardoned.

Some of the message between Ellis and the woman reportedly included nude photographs.

Lead investigator Lynn Hunt wrote in a search warrant affidavit that Ellis initially “was untruthful regarding any sexual contact." But he later confessed after seeing evidence from the Attorney General's office.

“Here, having performed sexual acts for payment, this woman has engaged in prostitution,” the affidavit stated. “Mayor Ellis, then, having intentionally encouraged her to commit those acts, has” committed solicitation.

Evidence uncovered during the investigation also indicated that Ellis had repeatedly used the N-word to describe African-Americans.

Lt. Col. Dan Patchin of the Shepherdsville Police Department said that he heard Ellis "talk about black people and referred to them as ‘N*****s’.”

In one instance, Patchin recalled Ellis saying "that every ‘N-----’ born should be injected with Cycle Cell [sic] so that they could not reproduce."

But the confession and evidence did not convince special prosecutor Mark Shouse, who dismissed the indictment for solicitation of prostitution.

Detective Hunt was fired for allegedly violating department policies. She was later accused of accessing government record without permission and charged with a misdemeanor. Hunt has filed a wrongful termination suit.

During an interview with WDRB this week, Ellis insisted that he had never used the N-word.

And even though Ellis confessed to prosecutors that he had solicited sexual favors, he denied the allegations when confronted with the evidence by WDRB.

"This is the first time I've seen [the Facebook messages]," he replied. "I don't recognize them."

The defiant mayor told the station that he had "no reason" to resign.

"We had talked about that, but I have no reason to," Ellis said.