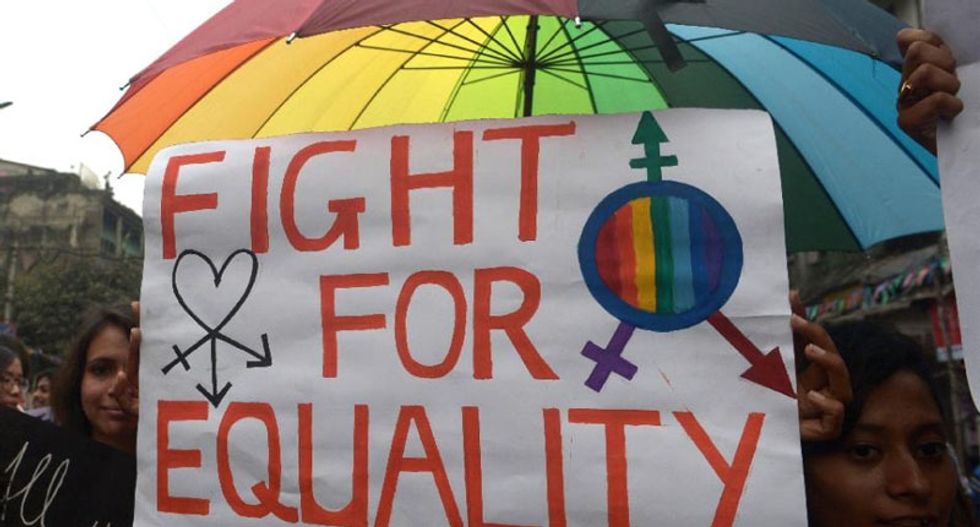 India's top court agreed Tuesday to review a decision which criminalises gay sex, sparking hope among campaigners that the colonial-era law will eventually be overturned in the world's biggest democracy.

The Supreme Court's three most senior judges accepted a last-ditch challenge against a 2013 decision reimposing the ban, which is stipulated in India's criminal code and enables the jailing of homosexuals.

"We believe that it is an important issue and it must be referred to a constitutional bench," Chief Justice T.S. Thakur told the court.

"We are going to constitute a bench of five judges which will now hear this matter."

Members of the gay community, some wearing rainbow-coloured scarves, clapped, hugged and cheered outside the court in New Delhi, echoing cautious celebrations held in other cities in India.

Fellow activist Dhrubo Jyoti said the community had feared that the judges would dismiss the appeal outright, adding: "We are hopeful that the honourable judges will now look into it and uphold our constitutional rights."

Tuesday's decision is the latest chapter in a long-running legal battle between India's social and religious conservatives and the gay community over the law passed by British colonial rulers in the 1860s.

Gay sex has long been a taboo subject in conservative India, where homophobic tendencies abound and some still regard homosexuality as a mental illness.

Six years ago the Delhi High Court effectively legalised gay sex in a landmark ruling which said the ban infringed the fundamental rights of Indians.

That 2009 ruling emboldened the still largely closeted gay community, which started to campaign publicly against widespread discrimination and violence.

But the Supreme Court reinstated the ban in 2013, saying responsibility for changing the law rested with lawmakers and not the courts.

Members of the gay community and campaigners lodged the curative petition -- or final appeal -- to the Supreme Court to have the 2013 judgement reviewed.

Prosecutions for gay sex are rare, but activists say corrupt police use the reimposed law to harass and threaten homosexuals. The gay community says criminalising homosexuality makes its members vulnerable to blackmail.

A lawmaker's attempt to introduce a private member's bill into parliament to decriminalise gay sex failed in December.

In the eastern city of Kolkata, activists carrying placards that read "Love is not a crime" erupted in song in celebration at Tuesday's decision, optimistic that the court would eventually strike down the ban.

"It (the decision) reinstates that democracy prevails and right to freedom of expression and right to a life of dignity is there," prominent transgender activist Laxmi Tripathi told the NDTV network.

"We welcome the Supreme Court's decision... to take it further."

Amnesty International said the decision was a "chance to correct a grave error, which continues to put LGBTI people under physical, mental and legal threat".

The court introduced "curative" appeals in 2002 as a final way for judgements to be re-examined. But very few of those reviewed have been overturned and the appeals can be dismissed outright without a hearing.