Iowa caucuses: Rubio's the real winner – and the Democrats 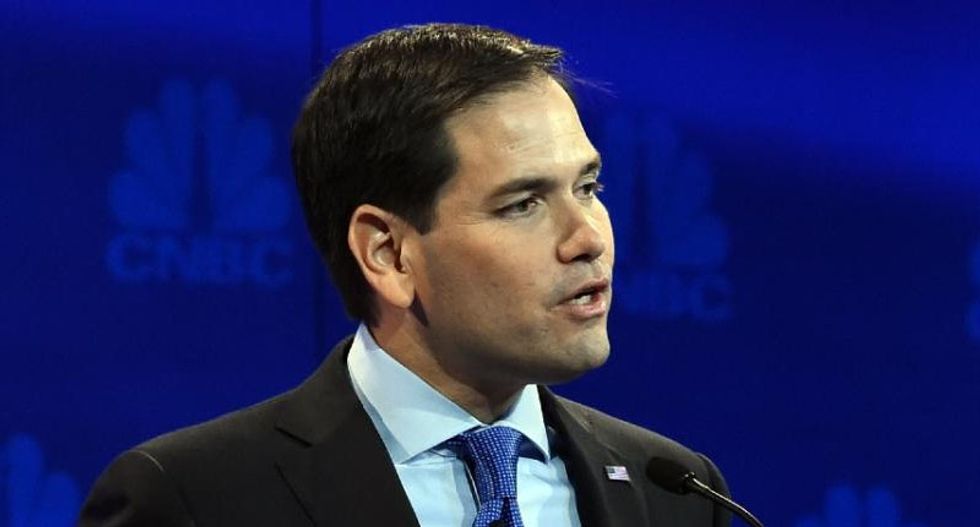 The votes have been counted in the first contest of the 2016 presidential campaign, the Iowa caucuses, and the winners are:

Republican senator Marco Rubio and the Democratic Party as a whole

That may sound odd given Rubio came in third, beaten by another senator, Ted Cruz of Texas, and the tycoon and reality TV star Donald Trump. And the Democrats' success may surprise media outlets such as CNN, focused on trying to break the “virtual tie” between Hillary Clinton and Vermont Senator Bernie Sanders.

But the key here is not just the final vote tally: it’s about the establishment – and about expectations.

How to win by coming third

But that is far closer than polls in Iowa had predicted for weeks, with the Florida senator stuck (and even receding) at 13%. There were signs after the final Republican debate, which Trump skipped, that Rubio had done well with both pundits and undecided voters – but nobody expected the surge that almost took him into second place on Monday night.

By doing so, he offered the clearest answer so far to the question of who can stop Trump and Cruz, neither of whom are seen as likely winners in a contest against Clinton.

Even with Jeb Bush falling into oblivion and other highly regarded Republican senators and governors scrambling to get attention, Rubio still took a while to emerge as the best alternative to Trump’s bombast and Cruz’s knack with fiscal and social conservatives. He’s still an outsider in the New Hampshire primary, but another solid showing will put him in position to rally the political endorsements and to raise the big money he needs for the important contests that begin in March.

This is all bad news for the other candidates, notably Bush, New Jersey’s governor, Chris Christie, and the Ohio governor, John Kasich. Each was hoping that he could become the establishment alternative with a breakthrough in New Hampshire, but barring an exceptionally strong run to overtake or run alongside Cruz, Trump, and Rubio, that is looking more unlikely than ever.

On the surface, Bernie Sanders' strong showing against Hillary Clinton makes for a dramatic narrative for the hungry 24-hour broadcast media. At last, they can be sure of a “hard-fought contest for the nomination”, supplying them with fodder for weeks or months to come. That will continue when Sanders triumphs in his neighbouring state of New Hampshire, as is now almost universally predicted.

But don’t be fooled. Sanders 2016 is not Obama 2008 – and another dramatic upset of Hillary’s procession to the presidency is not yet in sight.

Sanders will appeal to Democratic “progressives” and mobilise a lot of young voters, but he needs a surprise upset in a big state to make a lasting impression. That’s a far taller order than a strong showing in a small, white, and largely rural state such as Iowa or New Hampshire, especially given the sheer heft of the party machinery and funds behind Clinton, as well as her own almost unrivalled political networks.

Barring a truly unprecedented loss, Clinton looks to set secure the nomination when the bulk of primaries are held in March. And when that happens, the Democrats' message will be “unity”.

For all that their two campaigns' activists and staffers are at loggerheads, both Clinton and Sanders’s caucus night speeches were marked, as they have been for months, by a measure of mutual respect and proclamation of the core Democratic messages – economic stability, security in health care, and social progress.

That’s been in marked contrast to the Trump-led sniping and alpha male posturing distinguishing the Republican contest so far, and it will serve the Democrats well heading into the general election campaign.

Any Democrats worried about the risks of a progressive-moderate split would do well to calm their nerves. Some are no doubt fretting about a repeat of the 2000 election, when third-party progressive candidate Ralph Nader supposedly captured enough votes to hand Florida to George W Bush instead of Al Gore. But the “Nader effect” is something of a myth anyway – and unlike their tussling counterparts on the other side, Clinton and Sanders know better than to hobble their party with petty acrimony.

By Scott Lucas, Professor of International Politics, University of Birmingham