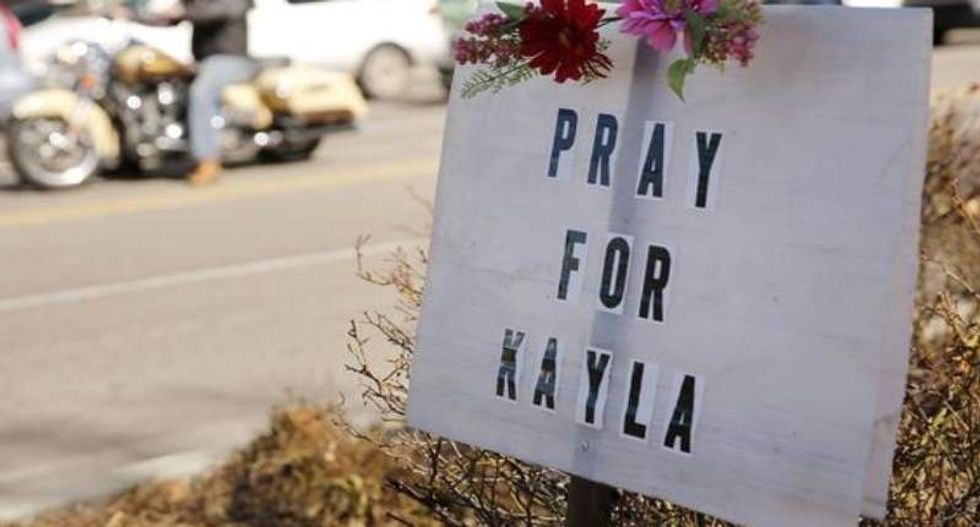 A sign for Kayla Mueller is displayed along a main street in Prescott, on Feb. 10, 2015. (Reuters/Nancy Wiechec)

The wife of a deceased Islamic State leader was charged on Monday in federal court in Virginia with conspiracy in the death of American aid worker Kayla Mueller who was killed a year ago while being held hostage in Syria by the militant group, the U.S. Justice Department said.

Nisreen Assad Ibrahim Bahar, aka Umm Sayyaf, 25, admitted to FBI agents last year that Islamic State head Abu Bakr al-Baghdadi "owned" Mueller during her captivity at Sayyaf's residence, and that "owning" her was equivalent to enslaving her, according to the complaint.

Mueller was raped repeatedly by al-Baghdadi while in captivity in Syria, U.S. officials and the Mueller family spokeswoman said last August. Mueller's family could not immediately be reached for comment on Monday.

Sayyaf, an Iraqi citizen and wife of Abu Sayyaf, a senior Islamic State leader until his death last May, is currently in Iraqi custody for her terrorism-related activities, according to a statement from John Carlin, the Justice Department's chief of national security.

Monday's charges "reflect that the U.S. justice system remains a powerful tool to bring to bear against those who harm our citizens abroad," Carlin said in the statement.

Carlin's spokesman, Marc Raimondi, told Reuters by email that the U.S. government was "fully supportive" of Sayyaf's transfer to Iraqi custody, and that the Justice Department continues to "cooperate with authorities in Iraq to support a prosecution through to its completion and to assist in ensuring that justice is served."

The department firmly believes that Sayyaf will be held to account for her crimes, "though we cannot guarantee any particular result," Raimondi added.

Mueller, of Prescott, Arizona, went to Turkey in December 2012 to work for a Turkish organization providing humanitarian aid to Syrian refugees along the Syrian border. She was seized in August 2013 while leaving a hospital in Aleppo in northern Syria.

Al-Baghdadi personally brought Mueller to be imprisoned inside the Sayyafs' home in Syria, U.S. officials told ABC News in August.

Sayyaf was charged on Monday with providing material support to a foreign terrorist organization that resulted in a person's death, and faces a maximum sentence of life in prison if convicted.

Fifty-eight of the 80 individuals accused by U.S. prosecutors of Islamic State-related crimes have faced the same charge, though the vast majority have not been accused of facilitating anyone's death.