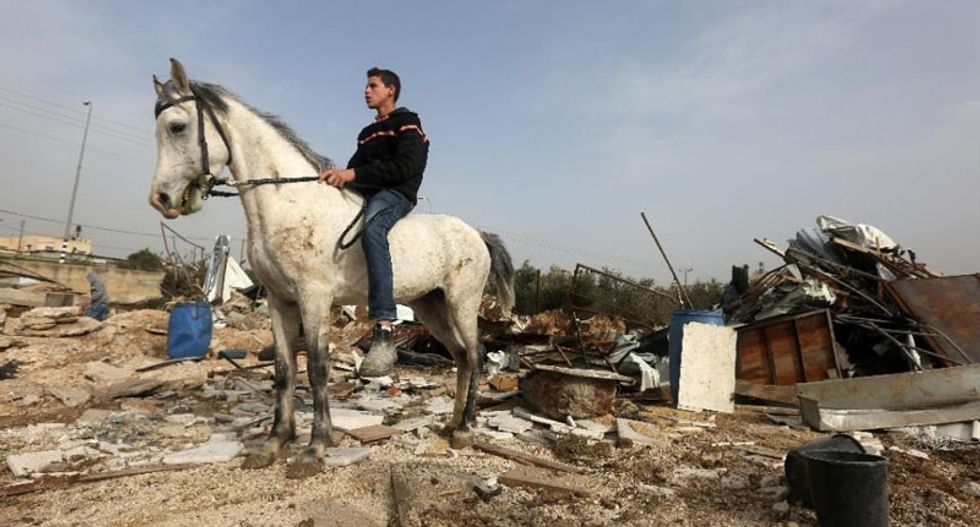 A Palestinian boy inspects the rubble of a farm that was demolished after Israeli authorities said it was built without a permit on January 18, 2016 in the West Bank village of al-Fundoq, east of the village of Qalqiliya (AFP Photo/Jaafar Ashtiyeh)

Soldiers destroyed the structures in and around the village of Khirbet Jenbah south of Hebron, the Association of Civil Rights in Israel said. Israeli officials said the buildings were illegal.

An EU spokesman denounced the demolitions and said that 10 of the buildings had been constructed with funds from ECHO, the European Commission's humanitarian arm.

The soldiers arrived at around 7:00 am (0500 GMT) and carried out the demolitions, leaving 12 families temporarily homeless, said Nidal Younes, head of the local council of a neighbouring village.

Israel has carried out a long campaign to relocate the residents of the area, which was declared a military zone by the Israeli government in the 1970s.

Human rights groups have repeatedly challenged Israel's claim to the land, arguing it is illegal to establish a military zone in occupied territory, Sarit Michaeli from the B'Tselem NGO told AFP.

The families argue that their ancestors, who were cave dwellers, have lived on the land since long before Israel occupied the West Bank in 1967.

A statement from COGAT, the Israeli defence ministry unit that administers civilian affairs in the West Bank, confirmed "enforcement measures were taken against illegal structures and solar panels built within a military zone."

The EU called on Israel to change its policies in the occupied West Bank.

"The EU expects its investments in support of the Palestinian people to be protected from damage and destruction," said a spokesman, who condemned the demolitions.

A High Court injunction later in the day ordered a halt to all demolitions until at least February 9.

The residents of the region had been undergoing a process of arbitration with Israeli authorities after a High Court ruling, Michaeli said.

However talks broke down in recent days.

"This basically means we are back to square one. The government wants to remove them. The residents object," Michaeli said.

COGAT said the negotiations failed as "the building owners showed no willingness to get the situation in order and illegal construction did not stop."

As such, "measures were taken in accordance with the law," it said.

In total, more than 1,000 people could be affected, Michaeli explained, as there are around 10 other villages that could face similar action.

The villages are represented by a number of different legal teams, so Tuesday's demolitions concerned only one of the claims.