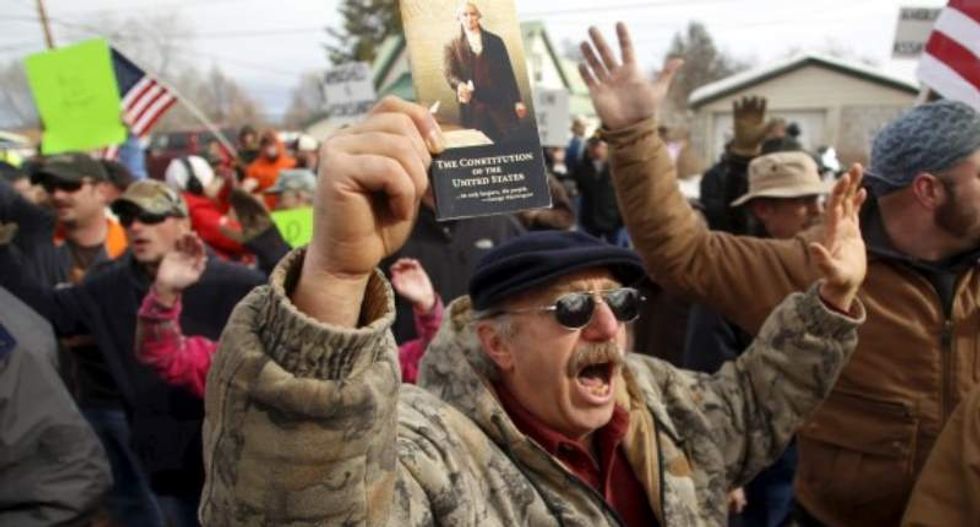 A pro-militia supporter holds a constitution while chanting "Hands up. Don't Shoot" during a protest outside the Harney County Courthouse in Burns, Oregon on Feb. 1, 2016. (Reuters/Jim Urquhart)

In early January, occupiers of a wildlife refuge in eastern Oregon mulled how the siege would end and what would become of them, including facing prison or dying.

What they did not anticipate was an apparent splinter group of armed occupiers ignoring their pleas and refusing to leave the remote Malheur National Wildlife Refuge.

Now frustration is mounting as the holdouts cloud the fate of nine former occupiers in custody, charged with conspiracy to impede federal officers. Two others were released on condition that they wear tracking devices as they await trial.

A judge has cited the continuing standoff as a major obstacle to the release of at least some of those who remain in custody.

Andrew Kohlmetz, an attorney for arrested protester Jason Patrick, referred to the holdouts as "four idiots" and said their stance is at odds with his client's aims and needs.

"I can only say that it does impact everyone's chance at release," said Kohlmetz, whose client remained briefly at the refuge after state police shot one protester dead and arrested several others, including leader and rancher Ammon Bundy on Jan. 26.

From jail, Bundy asked through his attorney for the occupiers to stand down, and Patrick was himself arrested soon after.

But the holdouts have ignored that plea, as Federal Bureau of Investigation agents and Oregon law enforcement continue to block access to the refuge 30 miles (48 km) from Burns in the state's rural east.

The four remaining protesters have been identified as Jeff Banta, 46, David Fry, 27, and a married couple, Sean Anderson, 47, and Sandy Anderson, 48, according to The Oregonian newspaper. None of the four were among the original group of occupation leaders, according to a Reuters witness.

Sean Anderson has a warrant out for his arrest in his previous home state of Wisconsin on misdemeanor charges from 2014 of resisting an officer, possession of marijuana and possession of drug paraphernalia, according to court records.

The four remaining protesters could not be reached for comment. In a video they posted to YouTube on Saturday, they described themselves as standing for their principles in continuing the protest.

In taking over the refuge, protesters criticized federal control of vast tracts of land in a flare-up of the so-called Sagebrush Rebellion, a decades-old conflict over federal jurisdiction of millions of acres in the West.