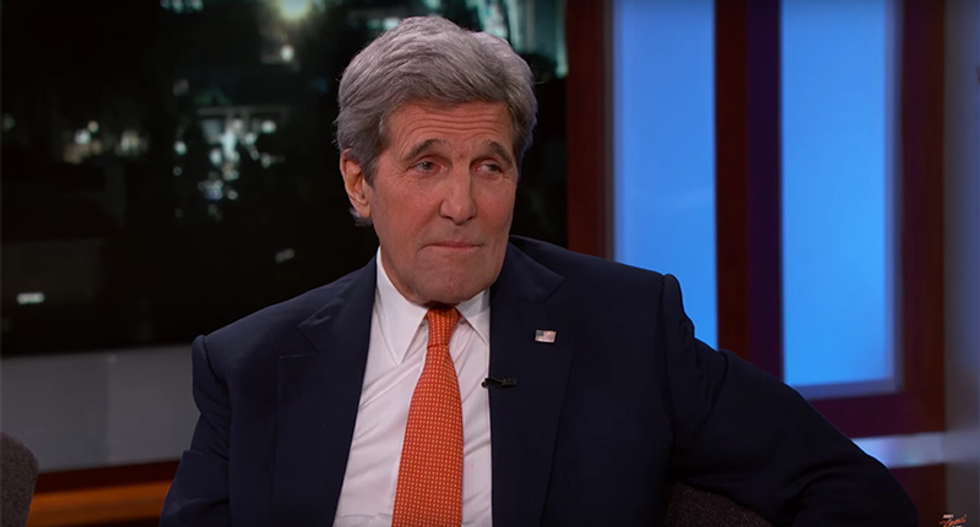 John Kerry took some time to bash Republicans on "Jimmy Kimmel Live" on Tuesday night. After exchanging pleasantries, Kimmel asked Kerry if he ever felt hopeless or if there was no reasoning with certain groups of people. "Am I allowed to lie?" Kerry asked. Kimmel replied that he could, asking rhetorically if that isn't what all politicians do. Kerry laughed and replied, "I'm out of politics now... and judging by the Republican field half of them are, too."

When it comes to the impact that words like Donald Trump's on banning Muslims play on international relations, Kerry said that it does impact the conversation. "I hear about it everywhere," Kerry said looking disappointed. "And I think next year the White House will be sending out a lot less Christmas cards." Kimmel replied that if Trump was in office he would send out only Christmas cards.

He also admitted that he loves the job of Secretary of State because he's able to represent the United States despite being held accountable when things go wrong globally. "To try to stop a war, to make our country better, to try to make our country stronger. It's a privilege." Kimmel asked Kerry about the ceasefire in Syria over the weekend and Kerry indicated that everyone knew they didn't want it to happen in two weeks or three weeks they wanted it as soon as possible. "You've got to push the [peace] process as hard as you can and try to save lives. And so, we're pushing the process. Because we said a week, we'll get it done sooner than if we had done it in two weeks or three weeks."

When it comes to the infamous 3 a.m. call, Kerry admitted that it is never good news but that there is a team that works around the clock and people are only generally woken up in extreme circumstances. Sometimes those calls go to the Secretary of Defense or directly to the president, but he typically isn't the person who has to wake the president up. Generally, it is the Chief of Staff, the White House or the National Security Advisor that has that unfortunate task.

Kerry also admitted that he always has a bag that never completely get's unpacked, and he's typically ready to go at all times. "There's no such thing as foreign policy," Kerry continued when talking about those who don't care about what's going on in the world. "Everything we do now, I mean this world is so interconnected, and everything that we do in the State Department is geared toward creating jobs, making life better for Americans, particularly for protecting us here at home... I mean we all saw San Bernardino. We know what happened in Paris. We know what the threat of Daesh is today," Kerry said talking about the disparaging name the White House uses for ISIS. "If we don't do our job to the best of our ability, all the time, we are letting the American people down. And I think President Obama has made it clear that the top priority of his administration is keeping America safe."

While Kerry says keeping the peace is important he concluded that he didn't think even the best Secretary of State could create a ceasefire between Taylor Swift and Kanye West.