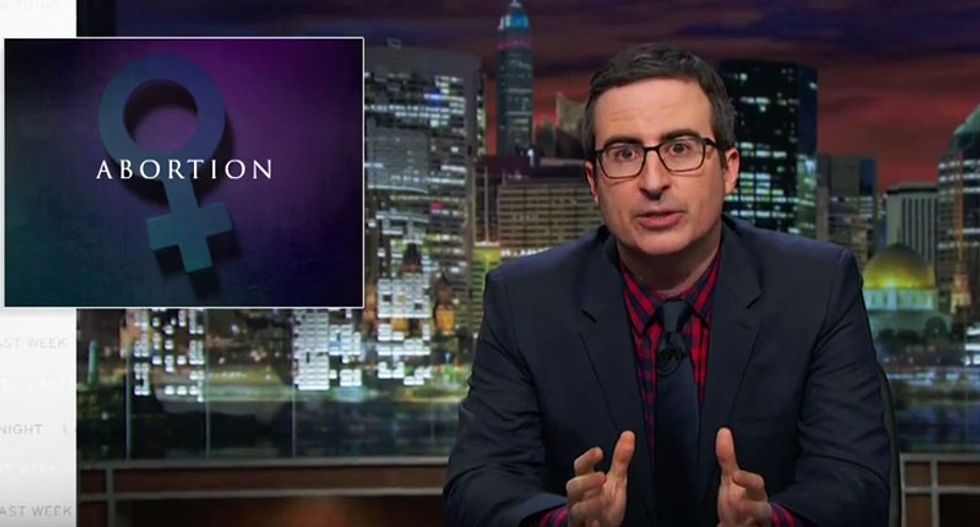 Last Week Tonight's John Oliver devoted the majority of Sunday's broadcast to a devastating exposé of Targeted Regulation of Abortion Providers laws, cobbled together by anti-choice lawmakers. The so-called TRAP laws are used by conservatives to place absurd restrictions on women's health clinics for the express purpose of keeping women from getting legal and safe abortions.

Oliver began the segment by pointing out that 19 percent of Americans polled on abortion feel it should not be available under any circumstances. He then suggested that any viewers who felt that way were "excused from watching" -- before inviting them to return minutes before the show ended to see video of baby sloths lolling in a tub as a peace offering.

Pointing out "abortion cannot be theoretically legal, it has to be literally accessible," Oliver shared a montage of clips of conservative state lawmakers all stating that their restrictive abortion laws were intended to ostensibly "protect women's health."

What followed was a comprehensive run-down on oppressive anti-choice laws that have left four states with a single clinic each offering abortions, absurd mandates requiring clinics to have 8-foot-wide corridors, and waiting periods that put the lives -- and the  livelihoods -- of women at risk.

One doctor is shown explaining to his patients that state law mandates that he tell them abortion can cause breast cancer -- before adding, "There is not a shred of scientific evidence to prove that," and then stating that the state can't keep him from telling them the truth.

In one brutal segment a health care worker recalled a patient who was stymied by so many onerous restrictions that she asked for instructions on how to self-induce an abortion using "what was in her kitchen cabinets."

Wrapping up the segment, the host welcomed back the 19 percent anti-choice viewers with the promised tub of sloths, before exasperatedly blurting out, "What the f*ck is wrong with you?"