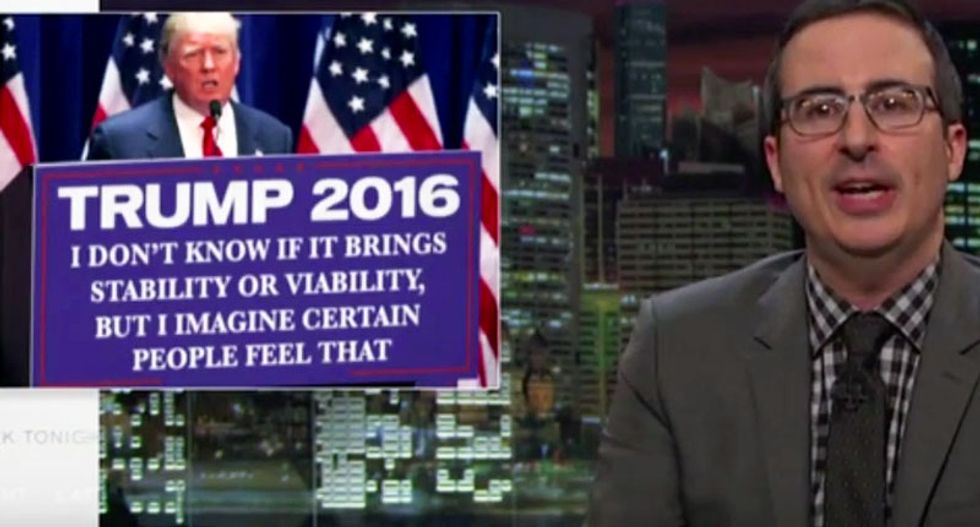 Sunday evening Last Week Tonight host John Oliver delivered the segment everyone has been waiting for this election season: an all-out assault on the presidential campaign of "bullshit artist" Donald Trump.

Oliver unleashed a whirlwind  of one-liners aimed at Trump's chronic lying, his baseless boasting and his string of failed business ventures -- all of which have either gone unnoticed or ignored by voters who believe that the "Trump brand" stands for "quality"

"Donald Trump can seem appealing until you take a closer look. Much like the lunch buffet at a strip club. Or the NFL. Or having a pet chimpanzee," the HBO host explained. "Sure, it seems fun, but someday Coco is going to rip your f*cking limbs off."

Oliver called into question Trump's claim that he is worth "TEN BILLION DOLLARS" which the candidate's campaign boasts on its website, in all-caps no less.

According to Oliver, Trump may "only be worth a mere $150 to $250 million dollars," which he admitted is a lot of money. However Trump inflates his worth by stating that his "brand"  -- by which he means the Trump name -- is worth $3 billion alone.

Quoting from testimony Trump gave in a libel case, the host pointed out that Trump estimates his net worth based upon "feelings, even my own feelings... and that can change rapidly from day to day."

"Think about that," Oliver stated. "He claimed that his net worth changes depending upon his mood, which makes absolutely no sense. Partly because he always seems to be in the same mood. Specifically, smug yet gassy."

With Trump boasting, "If I put my name on something, you know it's going to be good," Oliver ticked off a laundry list of Trump ventures from Trump Vodka to Trump Steaks (oddly sold at The Sharper Image) and even Trump Mortgages (launched before the housing bubble exploded)  --  all of which went belly-up.

Oliver summed Trump up as a "bullshit artist selling a shitty lifestyle" to a public that bought into his "Trump brand" hype, and that is exactly how he has come to lead the 2016 Republican presidential field.