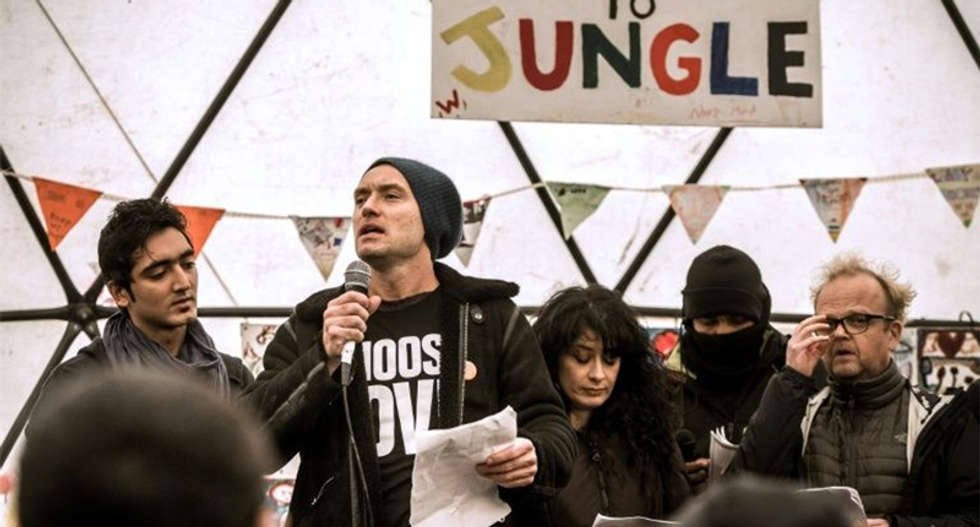 British actor Jude Law (C) speaks during a visit to the "Jungle" migrant camp in Calais on February 21, 2016 (AFP)

British celebrities including Jude Law and playwright Tom Stoppard gave performances at the "Jungle" migrant camp in northern France on Sunday to draw attention to the plight of refugees facing imminent eviction.

Law, the star of "Sherlock Holmes" and "The Talented Mr. Ripley", was spotted weaving his way through the mud and makeshift shacks to the Good Chance theatre, which was set up by British volunteers last year.

Around 200 residents of the camp showed up to watch the performance by Law and a group of British actors, comedians and singers, including Tom Odell and Toby Jones.

The event was organised by Letters Live, which gets celebrities to read letters from famous historical figures, and Sunday's event included new writing by refugees living in the squalid camp on the outskirts of Calais.

Law helped organise a petition to Prime Minister David Cameron this week, urging him to press France for a delay to the demolition of the southern part of the camp, which could start as early as Tuesday.

Over 96,000 people, including over 150 public figures, have signed the letter, which calls for children in the Jungle with relatives in Britain to be reunited with their families while their asylum cases are heard.

Actors Benedict Cumberbatch and Idris Elba were among the names on the petition.

"These are innocent, vulnerable children caught up in red tape with the frightening prospect of the demolition of the Jungle hanging over them," Law said earlier this week.

"David Cameron and the British government must urgently work with the French authorities to alleviate this humanitarian crisis."

The decision to bulldoze part of the camp is being challenged in court, with a ruling due on Tuesday.

Figures from charity Help Refugees show that there are 440 children living in the southern section of the camp, 291 of whom are unaccompanied.

The demolition by French authorities is part of efforts to discourage migrants from trying to smuggle themselves to Britain via the ferries or the tunnel under the Channel.

"Such an enforced move would uproot again those who have already had to abandon their homes due to war and persecution," read the celebrities' letter.

The presence of thousands of migrants in the camp who are desperately trying to reach Britain has become a political hot potato both within France and between Paris and London.

The latest estimates by the local authorities say there are 3,700 people living in the Jungle, and the government has been trying to persuade them to move to welcome centres elsewhere in the country, particularly as the weather worsened in winter.

Announcing the demolition earlier this month, the government's local representative Fabienne Buccio said: "The time has come to move on, no one must live in the southern part of the camp, everyone must leave this section."

She estimated that between 800 and 1,000 migrants would be affected.

Russia has the highest official virus death toll in Europe and on Friday added 1,064 fatalities and 37,141 new infections.

"We're in a worse situation than a whole series of European countries when it comes to vaccinations," Kremlin spokesman Dmitry Peskov told reporters.