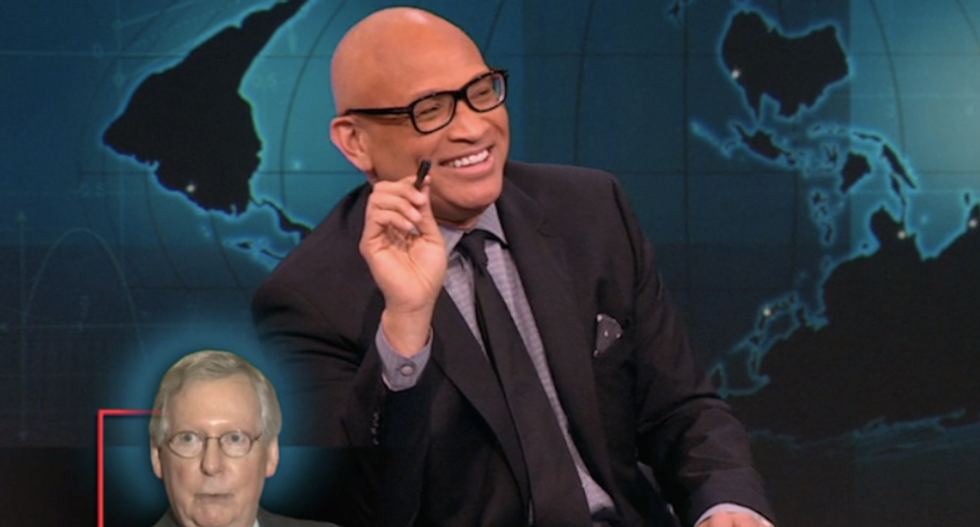 "It's been 11 days since the alleged non-murder of Antonin Scalia," Wilmore said. "That's right, folks -- there's no evidence to suggest Scalia was probably, definitely murdered."

The "Nightly Show" host said distraught Republicans had distracted themselves with a favorite pastime: undermining the president's authority.

Senate Majority Leader Mitch McConnell announced this week that the GOP-led Senate Judiciary Committee had unanimously recommended no hearings for any Obama nominee, and the Kentucky senator said he agreed with that -- which Wilmore suggested was absurd.

"Oh, you agree with that, Mitch McConnell?" Wilmore said. "You know why that's surprising? Because it was your idea!"

McConnell issued a statement on the day Scalia died vowing that no Obama nominee would get a vote, and Wilmore adopted the senator's orotund drawl.

"I agree with myself," Wilmore said, as McConnell. "Now, that's how a weasel behaves. You say some bullshit, and other people follow your lead and then you can say you agree with that bullshit."

Wilmore recalled how McConnell said in 2010 that the Republican Party's top priority should be to deny Obama a second term -- which he said the GOP couldn't even achieve.

Obama has floated a potential compromise nominee, Nevada's Republican Gov. Brian Sandoval -- but McConnell has said there is "not a snowball's chance in hell" that he'll relent.

"Hold on, I'm saying hell is hot," Wilmore said, again trotting out his McConnell impersonation. "See, and snowballs are cold. So it doesn't have a chance -- that's the joke. Ha ha. Ha ha."

Wilmore said conservatives were concerned Scalia would be replaced with a liberal judge -- but he said they weren't so concerned when Justice Thurgood Marshall, a champion of civil rights, was replaced by Clarence Thomas, "who doesn't even f*cking talk."

McConnell said voters should decide the next Supreme Court justice -- but Wilmore said they already had when they thwarted the GOP's plan and re-elected Obama in 2012.

"Now please do your job," he said.