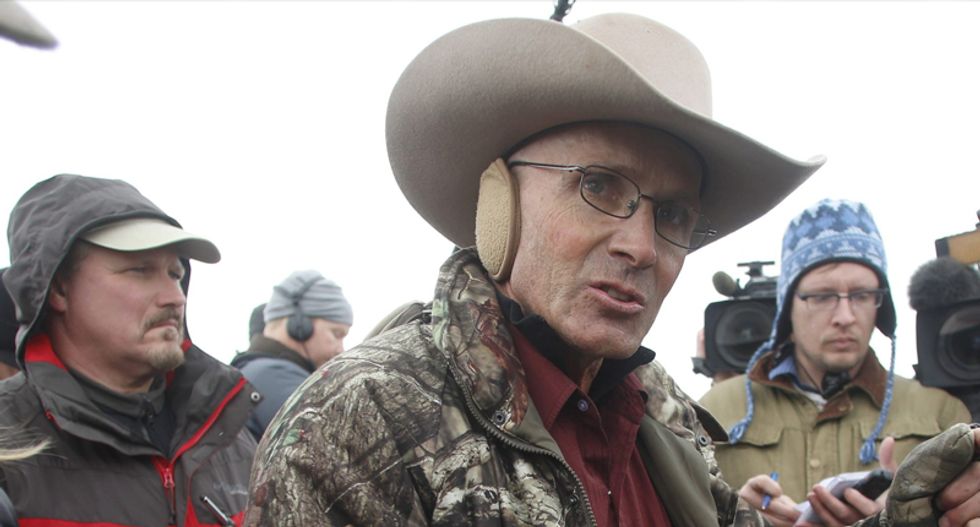 Relatives of a man shot dead by law enforcement officers after taking part in the armed occupation of a U.S. wildlife refuge in Oregon have accused the FBI and state police of covering up the circumstances of his death last week.

In a statement issued on Tuesday, family of Robert "LaVoy" Finicum called the shooting "unjustified" and said the Federal Bureau of Investigation and Oregon State Police were "seeking to manipulate and mislead the media and the American public about what really happened."

The FBI declined to comment beyond directing attention to an aerial video of last Tuesday's shooting that it released two days later and posted online.

The agency has contended the video shows Fincium outside his truck making a move for a gun in his coat pocket as he was shot to death by state police. The confrontation occurred on a snow-covered roadside after Finicum and others were stopped by police en route from the refuge to the town of John Day, Oregon, where they had planned to speak.

Finicum's relatives said they believe officers opened fire before he left his truck, and that he was shot before he lowered his hands in what they said was a reflex to being shot.

They demanded release of any footage that may have been recorded by police body cameras or dashboard cameras, any audio recordings relating to the shooting, and close-up images of Finicum's truck.

A statement on Tuesday from the Deschutes County Sheriff's Office that said it was leading an investigation into the shooting. State police did not immediately reply to a request for comment.

Finicum, 54, a spokesman for the group that seized buildings at the remote Malheur National Wildlife Refuge on Jan. 2, was shot dead shortly after the arrest of protest organizers Ammon Bundy and Ryan Bundy and several others.

The deadly encounter unfolded moments after Finicum sped away from law enforcement officers who had just taken the Bundy brothers into custody, then tried to run a police roadblock, plowing into a snowbank and narrowly missing an FBI agent.

Finicum can be seen raising his hands as he emerged from his vehicle, then turning as he apparently flails his arms and then falls to the ground, but his precise movements are difficult to discern from the video.

In their statement, his relatives said they had reached their conclusions about the shooting after speaking with Shawna Cox, who they said was in Finicum's vehicle and was arrested at the shooting scene.

Cox was released from custody by a Portland judge on Friday to await trial on a charge of conspiracy to impede federal officers.