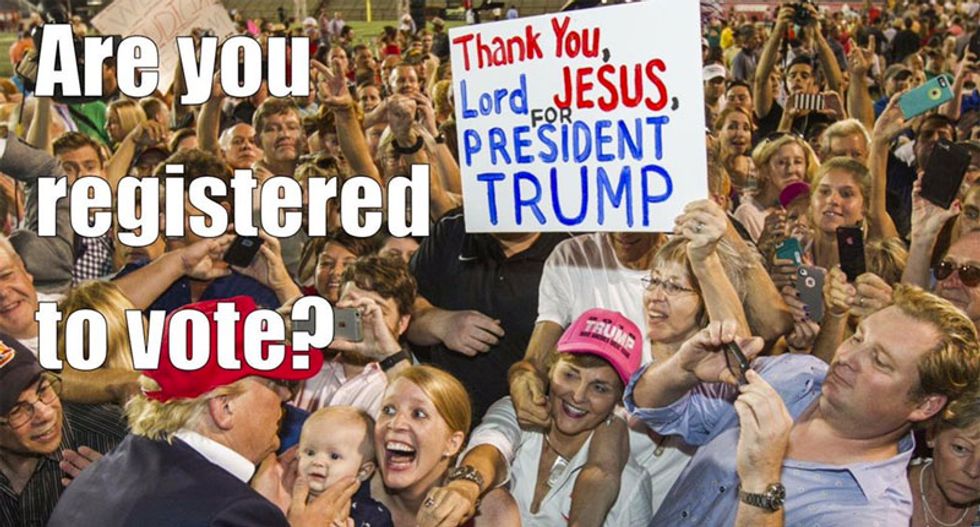 Trump was slammed for everything from making fun of a disabled reporter to his involvement with Trump University which is finally under intense scrutiny as he grows closer to landing the 2016 GOP presidential nomination.

While some Republicans are attacking Trump because they're backers of Marco Rubio or Ted Cruz, others just seem to want him gone because of the damage he's doing to the conservative brand.

Rubio, who began pushing back against his blustery rival during Thursday night's GOP debate, joined in the fun by calling Trump a "con artist," a label he repeatedly invoked on Friday:

Others made their point a bit more graphically:

A sampling from both sides below:

A casino is a rigged game guaranteed to take money from every person who walks in. Trump basically bankrupted a money factory. #NeverTrump
— Leon Wolf (@Leon Wolf)1456595559.0

#NeverTrump because a person who's capable of mocking a handicapped person isn't fit to lead the country https://t.co/AGvpl3JSHw
— Jennifer Tammaro (@Jennifer Tammaro)1456584258.0

Everybody has his limits. Mine is "unstable ignorant authoritarian nationalist" #NeverTrump https://t.co/O7jXvRgYnI
— Scott Lincicome (@Scott Lincicome)1456579189.0

Good to see Republicans and Democrats agreeing that no way no how do we need a Narcissistic Clown in Chief. #NeverTrump
— John (@John)1456548437.0

#NeverTrump because my family and Latino hertiage means way too much to me. And I won't let a petty, racist xenophobe represent me.
— 𝑨𝑰𝑴𝑬𝑬 𝑨𝑴𝑨𝑹𝑰𝑺 (@𝑨𝑰𝑴𝑬𝑬 𝑨𝑴𝑨𝑹𝑰𝑺)1456547526.0