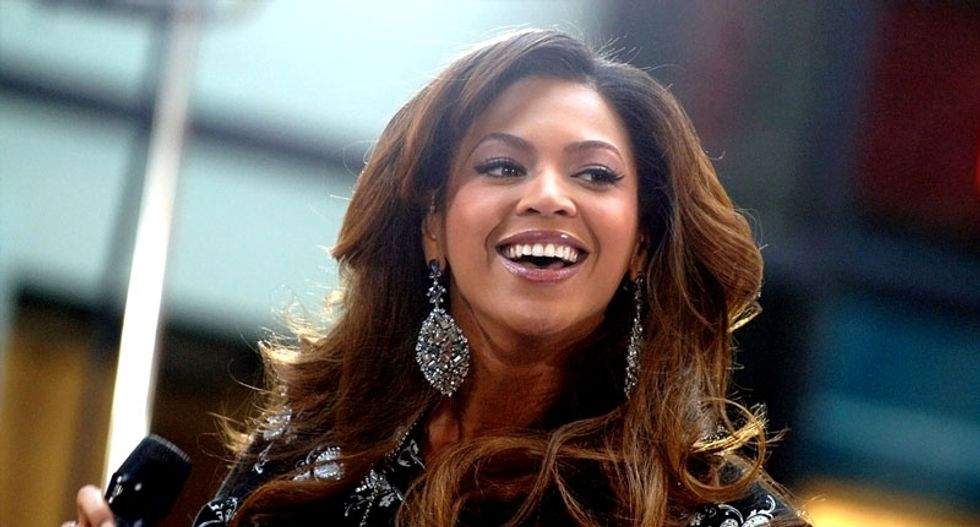 “There are no haters here to hate on,” said Mary Pryor, organizer of a pro-Beyoncé and Black Lives Matter counter-protest.

Sparked by an Eventbrite event – which, as the Daily Beast noted , doesn’t appear to have been started by an actual protest group but just by a single person – police cordoned off some of Park Avenue in anticipation of people protesting against Beyoncé’s Super Bowl half-time performance of her black pride song Formation, which featured dancers dressed as Black Panther activists .

At 9am, Tim Winterhalter turned up dressed in a New York Giants jersey for the anti-Beyoncé side.

“To be honest, I didn’t even watch the half-time show,” Winterhalter said. But he said he had seen the news coverage and the Eventbrite page and wanted to come “check everything out”, as he was annoyed that the Super Bowl had become political.

“This is a football game. If you want to have something with politics, you don’t have to do it on a football field,” Winterhalter said.

Related: How activists got a Black Lives Matter sign into the hands of Beyoncé's dancers

“Look at this, man! I’m loving this,” he added as people crowded around him with cameras and mics.

But as more protesters surrounded Winterhalter asking him what exactly he was protesting against, he claimed he was simply a bystander who was “passing through”.

Ten minutes later, another anti-Beyoncé activist arrived, confused about the lack of crowds.

“I was expecting to meet thousands of people,” said Ariel Kohane, 44, a volunteer for Ted Cruz’s presidential campaign .

“I’m here to protest Beyoncé’s ideology and that she should be more constructive and she should be trying to create peace and harmony instead of divisiveness,” Kohane said.

Kohane, a supporter of the Blue Lives Matter pro-police group, said he also had not seen the whole half-time performance but had watched news reports about it.

“I think it was awful, terrible, it didn’t even belong in the Super Bowl. It didn’t have anything to do with football at all,” Kohane said.

Kohane said he was specifically offended by the lyrics of Beyoncé’s songs as they were “demeaning police officers”, but he was unable to specify specific lyrics that had upset him.

Around 9.30am, a third anti-Beyoncé protester arrived.

April Bedunah, a 25-year-old business management student, said she had been a Beyoncé fan but viewed her dancers dressed in Black Panther outfits as a direct critique of police officers.

“If white people came out in KKK outfits, they would go crazy,” said Bedunah, who said her own son was half-black.

“She [Beyoncé] is letting the fame get to her head and she’s no longer the humble person that she used to be. She used to spread a message of love and now she ‘runs the world’.

“It’s sickening; it’s making people hate each other. She could have talked about anything else rather than trying to make people mad. And look what it caused. These people should be at work! I should be at school right now. We should be doing other things than this,” Bedunah said.

As rain poured down, much of the crowd dispersed. The pro-Beyoncé Black Lives Matter protesters did not seem surprised by the low turnout.

“It’s easier to be a racist online than it is in real life,” said Cherno Biko, 24.