Los Angeles-area methane leak was largest in US history: researchers 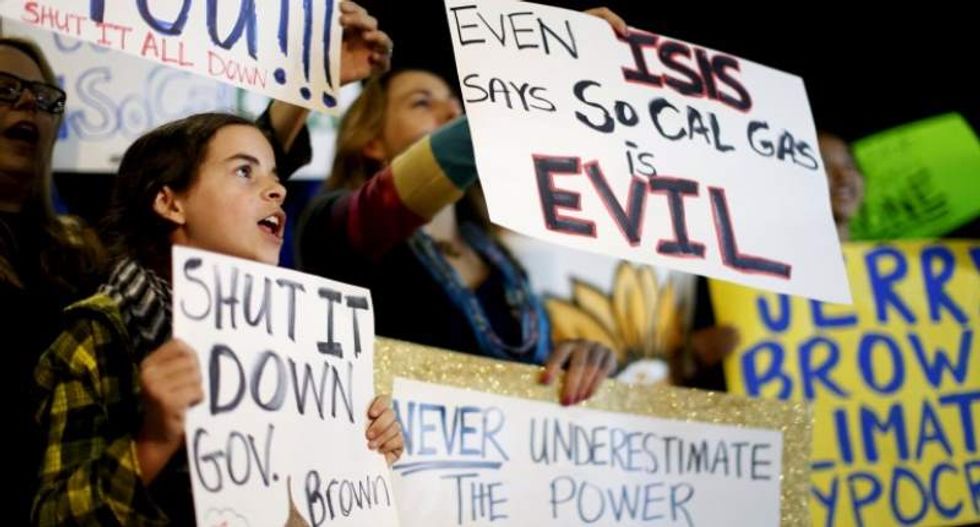 Madelyn Jones (L) holds a sign while rallying for the permanent shut down of the Aliso Canyon natural gas storage facility near the Porter Ranch neighborhood in Los Angeles, California on Feb. 19, 2016. (Reuters/Mario Anzuoni)

The months-long natural gas leak that forced thousands of Los Angeles residents from their homes ranks as the largest known accidental methane release in U.S. history, equal to the annual greenhouse gas emissions of nearly 600,000 cars, scientists reported on Thursday.

At its peak, 60 tons per hour of natural gas was spewing from a ruptured underground pipeline at the Aliso Canyon storage field, effectively doubling the methane emissions of the entire Los Angeles metropolitan area, the researchers said.

Their study, published in the journal Science, represents the first comprehensive effort to quantify a gas leak that sickened scores of people and prompted the temporary relocation of more than 6,600 households from the northern Los Angeles community of Porter Ranch at the edge of the gas field.

From the time it was first detected on Oct. 23 until it was plugged earlier this month, the damaged injection well discharged a total of 97,100 tons - or 5 billion cubic feet (142 million cubic meters) of methane to the environment, according to the study.

The chief component of natural gas and a far more potent greenhouse agent than carbon dioxide, methane persists in the atmosphere for 10 years. The total release from Aliso Canyon is equivalent to the annual energy-sector methane emissions of a medium-sized European Union country, the study said.

"Our finding means that the Aliso Canyon leak was the largest accidental release of methane in the history of the U.S.," Tom Ryerson, a scientist for the National Oceanic and Atmospheric Administration , and co-lead of the study, said in a NOAA statement about the research.

A 2004 accident in Texas actually expelled more natural gas, but it was mostly consumed in an explosion and fire, so that methane never reached the atmosphere, the study said.

"Aliso Canyon will have by far the largest climate impact" and will "substantially impact the state of California greenhouse gas emission targets for the year," the study said.

In terms of heat-trapping greenhouse potential, the volume of leaked methane was equivalent to putting 572,000 passenger cars on the road for a year, according to the scientists.

The Aliso Canyon facility, owned by Southern California Gas Co, a division of San Diego-based Sempra Energy, is the fourth largest gas storage field of its kind in the United States. The volume of methane that escaped represents just 3 percent of its total capacity, the study said.

Environmental groups have seized on the Aliso Canyon disaster in calling attention to hazards posed by the state's aging fossil fuel infrastructure. The crippled well there was converted from oil production to gas storage in 1973.

The leak has also triggered a wave of legal action. SoCal Gas has pleaded not guilty to criminal misdemeanor charges stemming from the release, which prosecutors said the utility failed to report in a timely manner. Local, state and regional authorities, as well as dozens of residents, have also sued the company.

On Thursday, a judge sided with county officials in ordering SoCal Gas to keep footing the bill for displaced residents until March 18, extending temporary housing assistance from the company by three weeks.

The study was based on data collected from airborne and ground-based measurements taken during the course of the blowout and analyzed by teams from NOAA, the California Energy Commission, two University of California campuses and the University of Colorado at Boulder.