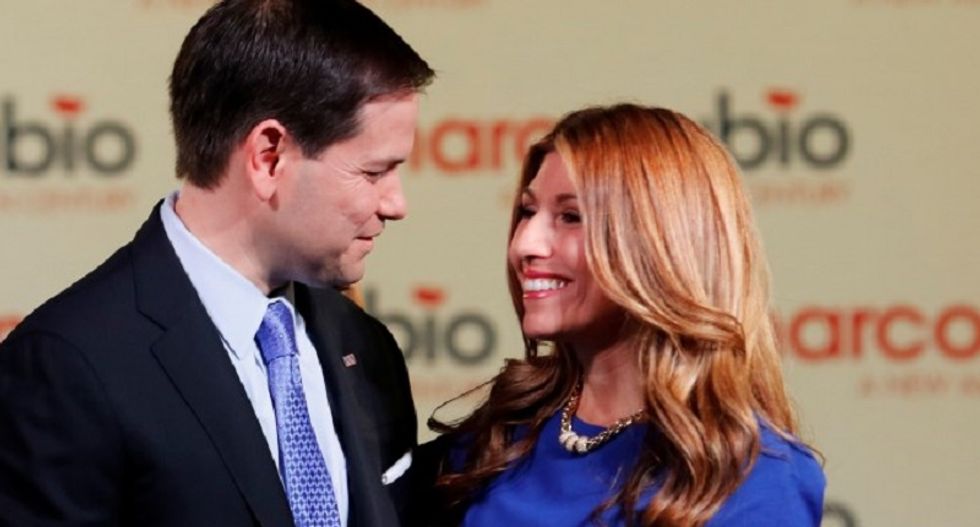 U.S. Senator Marco Rubio (R-FL) embraces his wife Jeanette as she comes out to join him after he announced his bid for the Republican nomination in the 2016 U.S. presidential election race during a speech at the Freedom Tower in Miami, Florida April 13, 2015. REUTERS/Joe Skipper

Republican presidential candidate Marco Rubio and his wife, Jeanette, paid $526,092 in taxes on $2.29 million of income from 2010-2014, his campaign said on Saturday, in a move meant to pressure billionaire rival Donald Trump to release his taxes, too.

The family's home mortgage represents its only debt, and the couple pays to send their four children to private schools, the Rubio campaign said in a statement.

Rubio often discusses his past financial woes on the campaign trail, including the nearly $150,000 in student loan debt he incurred by the time he graduated from law school, paid off with proceeds made from his 2012 autobiography.

In addition to student loans, Rubio has faced questions about the handling of his personal finances after it was discovered that he struggled for several months in 2008 to pay the mortgage on his $384,000 South Florida home, despite a $300,000 salary from his job at a Miami law firm.

The financial issues were enough to give political strategists pause in 2012, when Rubio was considered a possible vice presidential pick.

During his 2010 bid for the U.S. Senate, which followed his stint as a Florida state lawmaker from 2005-2006, Rubio also had to defend his use of a Republican Party-issued American Express credit card for more than $7,200 personal expenses, which he later paid back.

"There is no doubt the Rubio family has come a long way from the days when their largest monthly expense was a check to (student loan provider) Sallie Mae and checks were sent in the mail to pay bills with the hope the payment did not arrive before the next paycheck was deposited into their account," the campaign said.