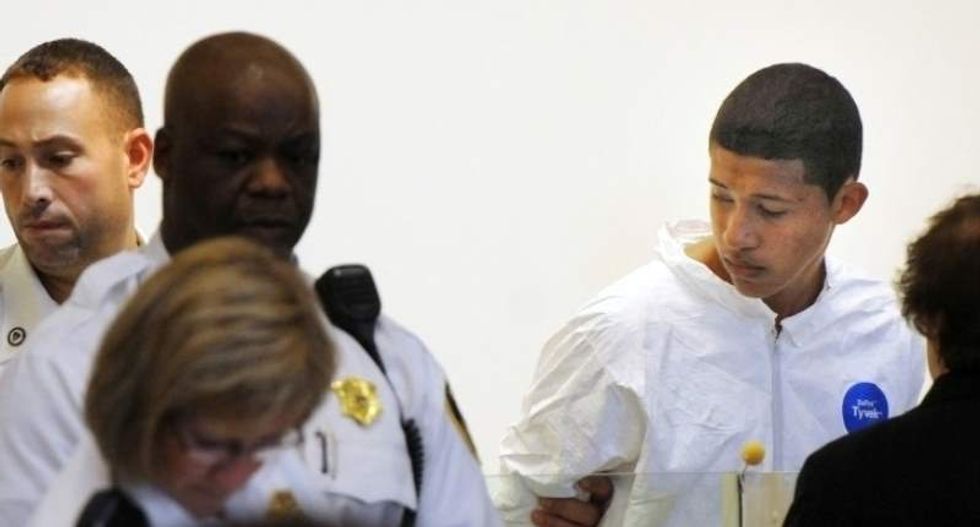 A Massachusetts judge sentenced a teenager convicted of raping and murdering his high school math teacher to serve at least 40 years in prison, and the victim's father called the killer "pure evil."

Philip Chism, 17, was convicted in December of killing Colleen Ritzer, a 24-year-old math teacher at his suburban Boston high school. The sentence of life in prison, with the possibility of release after 40 years, was less than the 50 years prosecutors had asked Essex County Superior Court Judge David Lowy to impose.

"When something terrible happens, people will often say, 'It could always be worse,'" Lowy said. "It is difficult for this court to imagine what could be worse for an individual and family to endure than the brutal murder of Colleen Ritzer."

Ritzer's mother, Peggie, criticized the sentence as too lenient.

"We are devastated and feel betrayed with Judge Lowy's inability to give three consecutive life sentences without the eligibility of parole to the individual that took Colleen’s life in such horrific manner," she told reporters after the hearing.

Chism was a 14-year-old freshman who had just moved from Tennessee when he killed Ritzer, cutting her throat with a box cutter and using a recycling bin to dump her body.

"I will never forgive him. He is evil, pure evil," father Tom Ritzer said. He was one of nine friends and family members of the victim who spoke at the sentencing.

Chism's attorneys had asked the judge to make him eligible for parole when he turned 40.

"Witnesses ... testified that he was nice, respectful, kind," said public defender Susan Oker. "So what happened? We stand here today not understanding."

"Words can't express the amount of pain and sorrow these past two and a half years have been," Diana Chism said. "There is no one who has suffered more than the Ritzer family."

Chism was tried as an adult but because of his age was spared the sentence of life in prison without possibility of parole that the state normally applies for a first-degree murder conviction.

"I want everyone to see the impact of that decision on this family,” said Essex County District Attorney Jonathan Blodgett. "At some point in time, they will sit at a parole board hearing, perhaps multiple times, and return to the most horrific and devastating moment of their lives."