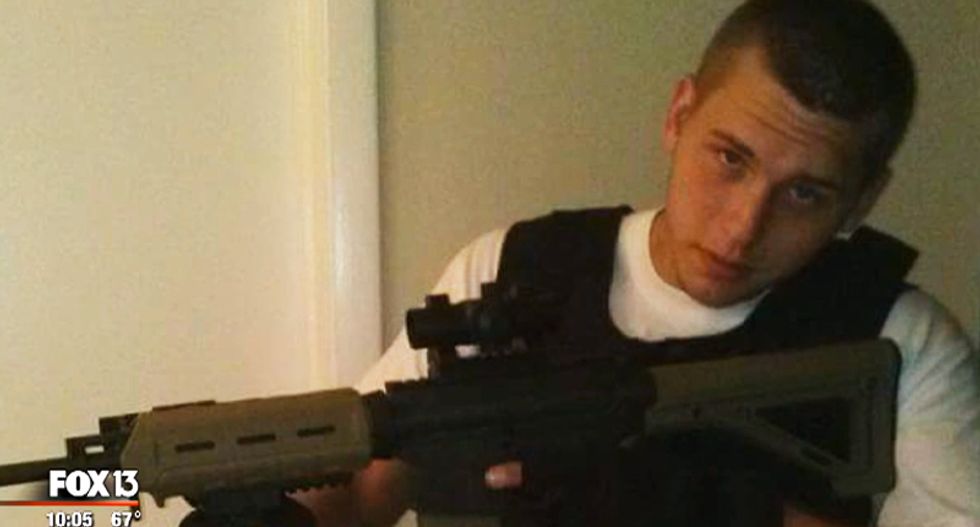 A Florida man who claims to be a member of the "United States Patriot Army" was taken into custody on Monday after a business partner spotted pipe bombs in his Tampa home.

Michael Ramos was arrested by ATF agents who recovered the bombs along with tear gas canisters and smoke bombs when they raided his house, reports Tampa Fox 13.

According to authorities, Ramos is one of the founders and president of Patriot Armor, Inc. -- a company that manufactures body armor and sells it to law enforcement officers and firefighters. His partner, Kenneth Ray O'Neill, contacted authorities after seeing the pipe bombs in Ramos' house and asking about them.

Ramos reportedly told his partner that he made the bombs himself using materials purchased at Home Depot and through Amazon.com. He stated that he had inserted bird-shot into them, adding "it would kill the neighbors if one of the bombs went off."

According to an affidavit, O'Neill confronted Ramos before reporting him -- telling him he needed to get rid of the bombs or he would contact the police, to which Ramos replied,"so you're going to put me in jail?"

When O'Neill contacted him later and asked if he had destroyed the bombs, Ramos reportedly explained that he hadn't because he didn't know how to and was too scared to get rid of them.

After being taken into custody, investigators found postings on Ramos' Facebook page expressing his anti-government views, including one that read: "The United Sates Constitution: we the people have the right to assemble a ARMED MILITIA to regulate government when they get out of control. They don't want you to know that. We need to stand for our rights. Before we COMPLETELY LOOSE (sic) THEM."

Investigators stated that Ramos claimed to be a member of the "United States Patriot Army" based out of St. Petersburg.

The Florida man defended himself to law enforcement officials, saying he only created the bombs for"preparedness/protective" reasons before stating he had no "intentions of harming anyone with the bombs."

Ramos is facing charges of illegal transfer of a firearm and making a firearm.

Watch the video below via Tampa Fox 13: