Missouri man threatens Muslim family shouting 'You, your wife and your kids have to die' 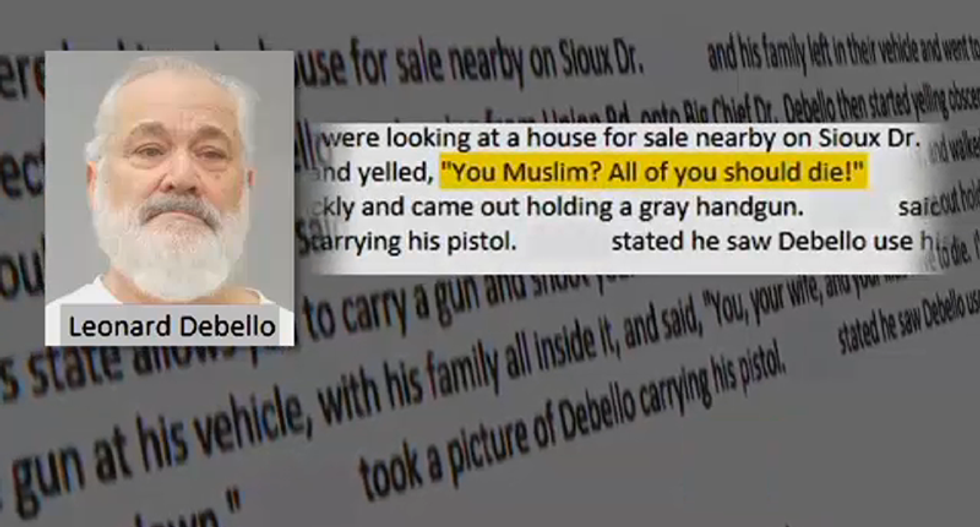 A 72-year-old Missouri man allegedly threatened a Muslim family while they were looking for a new home, according to a report by KMOV news.

Leonardo Debello, acknowledged that he was accused during a fight with a father and his family where he told them he wanted them to die.

The father is from Jerusalem and his wife is from Iraq and their hope was to escape violence so that they could raise their four children in the safer city of St. Louis. They were looking at a home on the corner of Sioux Dr. and Big Chief Dr. but as they were leaving they encountered Debello. The family said he shouted, "You Muslim? You should die!" He allegedly continued roaring, "This state allows you to carry a gun and shoot you," walked inside and returned with a handgun. He then pointed the gun at the car with the children inside and yelled, "you, your wife and your kids have to die."

On the advice of his attorney, Debello wouldn't address the incident on camera but told KMOV that he is a decorated Vietnam veteran. He also showed a sign he hung after the altercation next to his door that reads: "Take your meds." Debello said that he suffered from war-related post-traumatic stress disorder and that he was not taking his medication for it when the incident occurred.

Debello said that he regrets what happened and his role in the exchange, but does dispute some accounts in the police report though he wouldn't say what they were.

The family said they'd be willing to give an interview about the incident but wanted to speak to the FBI first.