Mitch McConnell: Republicans will drop Trump 'like a hot rock' if he wins the nomination 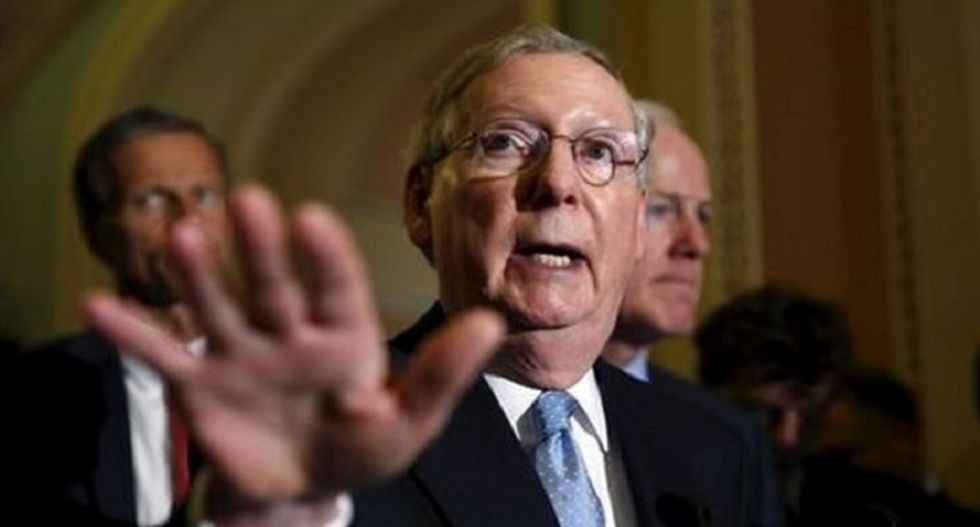 In private meetings in Washington, Republicans are preparing for their latest worst case 2016 election scenario: Donald Trump might be their presidential nominee.

Normally at this point in the election cycle the GOP would be gearing up for attacks on their anticipated Democratic rival for the White House. But party leaders are so distraught at the idea of the blustery businessman heading the ticket, that Senate Majority Leader Mitch McConnell has taken to advising candidates to keep their distance from Trump.

According to the New York Times, McConnell is assuring Senate candidates running for reelection that they should feel free to run ads against Trump if they feel he is hurting their own campaigns. According to senators attending private lunches with the Majority Leader, McConnell is taking the approach that Trump will lose badly in the general election and that senators should sell themselves as a bulwark against a Hillary Clinton presidency.

Pointing out that he still won easily when President Bill Clinton was reelected, McConnell reportedly told colleagues that the party will drop Trump "like a hot rock" if he is the nominee.

News of the party's preemptive rejection of the potential nominee comes after a luncheon meeting attended by Republican governors and donors in Washington on Feb. 19 where political guru Karl Rove warned that Trump may be unstoppable for the GOP -- and that his nomination could destroy other Republican candidate's chances in November.

According to people who attended a private presentation hosted by the conservative billionaires Charles G. and David H. Koch,  Trump’s record was deemed utterly unacceptable, causing high profile donors to hold back on donations out of fear it will be money that will be wasted.

As for stopping Trump from becoming the face of the party come November, Republicans are flummoxed.

“There is no mechanism,” said Former Gov. Michael O. Leavitt of Utah. “There is no smoke-filled room. If there is, I’ve never seen it, nor do I know anyone who has. This is going to play out in the way that it will.”