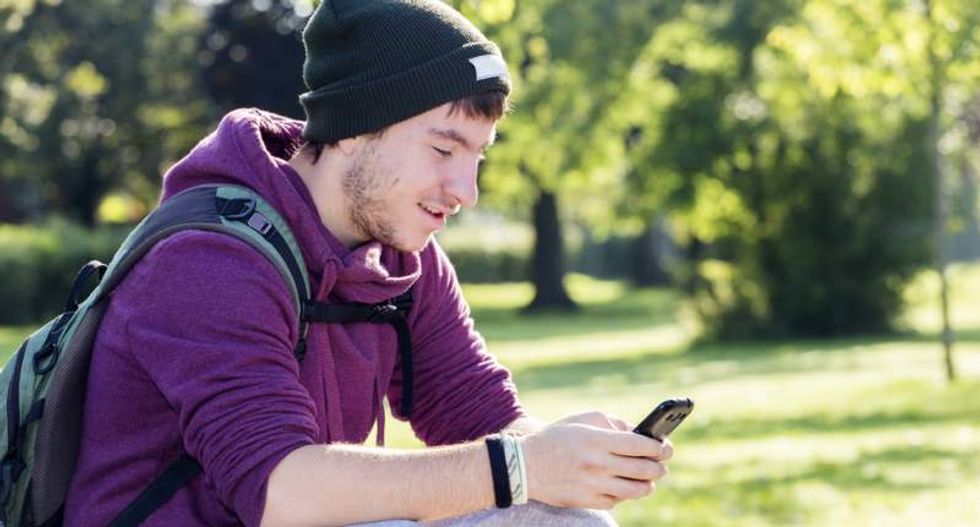 'Teenager texting on his cellphone' [Shutterstock]

The new law means adolescents caught sharing explicit photos with each other will no longer risk charges, prison sentences and a damaging criminal record

New Mexico teenagers can now exchange nude photos without fear of criminal prosecution under a new bill that legalizes sexting and could have national implications for laws on child abuse images.

Governor Susana Martinez, a Republican, signed into law a proposal that allows people aged 14 to 18 to engage in consensual sexting, which means adolescents caught sharing explicit photos with each other will no longer risk facing “child pornography” charges, prison sentences and a damaging criminal record.

“Kids will be kids, and they’re going to make mistakes,” said state senator George Muñoz, a Democrat who authored the legislation exempting sexting from child exploitation laws. “You can’t punish them for the rest of their lifetime with a charge of child pornography … if they’re consensually sending photos back and forth.”

The bill, which sparked opposition from the state’s attorney general, stemmed from concerns that prosecutors have increasingly charged teenagers with harsh charges for texting lewd photos to each other – a practice that studies have shown is now very common in the smartphone age. Researchers have also found that a majority of adolescents are unaware of the potentially serious legal consequences of sexting.

“Most people, from a commonsense perspective, agree that this is not behavior that should be criminalized,” said Steven Robert Allen, policy director of the American Civil Liberties Union of New Mexico, which helped craft the legislation. “It’s misguided behavior and certainly something where parents should get involved. But kids shouldn’t be charged … It’s just absurd.”

Before the law was passed on Thursday, if minors in New Mexico were caught sexting – typically with a parent discovering photos on a child’s phone and then reporting it to the authorities – the youth could face charges of possessing, distributing and manufacturing child abuse images.

“Teens in the sexting context could be facing huge amounts of time for a bad decision that is common practice for kids now,” Chavez said.

Because juvenile records are sealed, Chavez said there isn’t reliable data on how frequently teens were being charged for sexting and whether the cases resulted in convictions. But she said defense lawyers reported that they were representing teens charged with child sexual exploitation for actions that clearly constituted sexting.

One case, Chavez said, involved a teen who had shared images through Yik Yak, a mobile app that allows for anonymous messaging and has become popular on college campuses. Apps like Snapchat, which allow users to send photos that subsequently disappear – but can be saved with a screenshot – have also been increasingly associated with sexting.

Allen said the ACLU recently learned of a case in which a teenage boy was detained and charged after authorities found that he had received an explicit photo from his girlfriend. “Legislators from both parties understood that this isn’t something that should be criminalized,” he said.

A case in North Carolina thrust the issue of sexting laws into the spotlight when authorities charged two 16-year-olds who were dating with multiple counts of sexual exploitation of a minor after discovering that they had shared nude selfies.

They were both considered perpetrators and victims in the case, and if convicted, they would have been labeled as sex offenders for decades. Eventually the charges were reduced to misdemeanors, landing them a year on probation.

Most states haven’t updated their child abuse image laws to account for sexting, and supporters of the New Mexico law hope other legislatures will follow suit.

“Our laws have to change with technology,” said Muñoz, who proposed the sexting reform as an amendment to a larger bill that enacted tougher penalties for child abuse images.

The proposal specifies that the minors engaged in sexting are only exempt from prosecution if they “knowingly and voluntarily” exchanged images and if there was no coercion involved.

Even though Martinez signed the bill, she said she disagreed with Muñoz’s proposal but passed the legislation anyway because of its expansion of exploitation penalties.

“I don’t support the so-called ‘sexting’ amendment, as I believe the reasoning behind it is misinformed and it was not carefully considered,” Martinez said in a statement, adding that she would ask the legislature to “work on this issue” in the next session.

The governor’s spokesman did not respond to a request for comment.

The state attorney general, Hector Balderas, who supported the original exploitation legislation, slammed the sexting proposal as dangerous. He said in a statement: “I cannot support an amendment that weakens protections for teenagers from predatory activity [and] creates a dangerous new child exploitation loophole.”