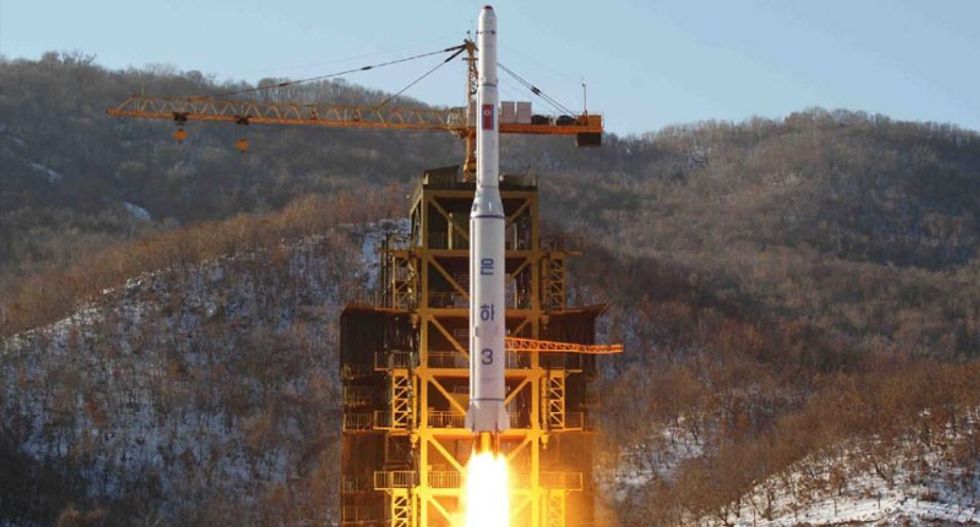 The North sent formal notifications to three UN agencies, including the International Maritime Organisation (IMO), of its intention to launch an earth observation satellite between February 8-25.

The United States, which has been spearheading a diplomatic drive for harsher, more effective sanctions on Pyongyang over its latest nuclear test, condemned the launch plan.

This is "yet another egregious violation of (North Korea's) obligations," said Daniel Russel, the assistant US secretary of state for Asia-Pacific Affairs.

"This argues even more strongly for action by the UN Security Council and the international community to impose... tough additional sanctions," Russel said.

Although Pyongyang insists its space programme is purely scientific in nature, the United States and its allies insist such space launches are aimed at developing an inter-continental ballistic missile (ICBM) capable of striking the US mainland.

UN resolutions forbid the North from any use of ballistic missile technology, and sanctions were imposed after its last rocket launch in December 2012.

If the notified launch goes ahead, it would be a further slap in the face of the international community which is struggling to find a united response to the January 6 nuclear test.

The North's notification to the IMO said the launch would take place in the morning with a daily window of between 7:00am-midday Pyongyang time (2230-0330 GMT).

There had been widespread speculation in recent weeks regarding an imminent rocket test, after satellite images showed increased activity at the North's main Sohae satellite launch station.

Since early 2013, North Korea has been upgrading the Sohae launch complex to handle larger, longer-range rockets with heavier payloads, but most experts say Pyongyang is still years from obtaining a credible ICBM capability.

"North Korea is still a long way off from being able to strike the US mainland," Siegfried Hecker, one of the foremost authorities on Pyongyang's nuclear weapons programme, said in a recent interview.

"It has only had one successful space launch. It needs a lot more, but it has made a large effort in that direction," Hecker said.

The flight plan coordinates sent to the IMO were similar to those followed by the three-stage Unha-3 rocket launched in December 2012 -- suggesting the same carrier would be used again.

The separated first stage was predicted to fall in the Yellow Sea around 200 kilometres off the west coast of South Korea, followed by a second stage splashdown in the Philippine Sea.

Although the 2012 rocket launch was successful in putting a satellite in orbit, experts say the North still faces the technical challenge of developing a missile and warhead that can withstand the heat of re-entry.

Confirmation that the North is planning a fresh launch is likely to put more pressure on China, Pyongyang's chief diplomatic protector.

Beijing has been resisting Washington's push for tougher sanctions on the North, but a rocket launch would bolster calls for China to bring its maverick neighbour into line.

While its patience has been stretched to the limit by Pyongyang's refusal to curb its nuclear ambitions, China's overriding concern is a collapse of Kim Jong-Un's regime and the possibility of a US-allied unified Korea on its border.

US Secretary of State John Kerry met with his Chinese counterpart Wang Yi in Beijing last week and said they had agreed to mount an "accelerated effort" to resolve their differences over a UN resolution condemning the North's latest nuclear test.

But Kerry acknowledged that the two diplomats had not agreed on the "parameters of exactly what (a resolution) would do or say."