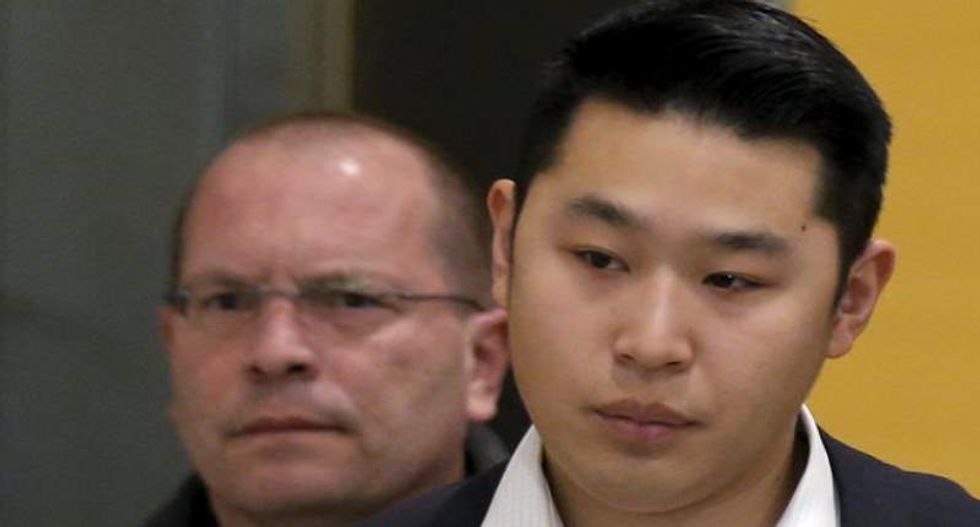 New York City Police officer (NYPD) Peter Liang is led from the court room at the Brooklyn Supreme court in the Brooklyn borough of New York on Feb. 11, 2016. (Reuters/Brendan McDermid)

A New York City police officer was convicted of manslaughter on Thursday for fatally shooting an unarmed black man in a darkened public housing stairwell in 2014.

A jury in Brooklyn found Peter Liang guilty in connection with the death of Akai Gurley, 28, who was killed by a bullet fired from Liang's gun on Nov. 20, 2014, that ricocheted off a wall.

Liang, a rookie cop at the time, was on patrol inside a Brooklyn public housing project with his partner and drew his gun upon entering a pitch-black stairwell.

He fired a single bullet that glanced off a wall and into the chest of Gurley, who was walking one floor below.

At trial, Liang, 28, testified that a sudden noise startled him, causing his finger to slip onto the trigger and fire the gun. It was only after descending the stairs, Liang said, that he realized the errant bullet had hit Gurley.

"Oh my god, someone's hit," a tearful Liang recalled saying upon finding a bleeding Gurley lying on a landing, as his girlfriend frantically tried to revive him.

But prosecutors argued that Liang fired toward the sound deliberately and that he must have known only another person could have caused the noise that surprised him.

"It was a tragedy, but justice was done," Brooklyn District Attorney Kenneth Thompson told the television station NY1. "What we saw today is that people from all walks of life came together here in Brooklyn to affirm that Akai Gurley's life did matter."

The shooting added to nationwide protests in cities like Baltimore and Ferguson, Missouri, over the use of police force against minorities, though Liang, a Chinese-American, was not accused of deliberately killing Gurley.

Activists on Twitter cheered the verdict, with many saying it was an important first step in holding officers accountable. Organizers had already called for a demonstration on Friday at police headquarters regardless of the trial's outcome.

Thompson said the case had no connection to the ongoing political debate over police tactics.

But Patrick Lynch, the president of the city's largest police union, said in a statement that the verdict "will have a chilling effect on police officers across the city because it criminalizes a tragic accident."

Liang was also convicted of official misconduct for failing to offer medical aid to the dying Gurley. His lawyers had argued he was in a state of shock and felt unqualified to perform CPR due to inadequate police training.

Shaun Landau, his partner, who testified at trial under an immunity agreement, said Liang broke down in tears after realizing he had shot someone.

He faces up to 15 years in prison when he is sentenced in April. The jury, which was largely white, reached its verdict after more than two days of deliberations.

As the trial concluded on Tuesday, prosecutors offered jurors a new and more damning account of the incident, claiming for the first time that Liang aimed a shot on purpose toward the sound he heard.

"I think it's clear to you that he knew someone was there," Assistant District Attorney Joseph Alexis told jurors in his closing argument, adding that the shooting was "no accident."

Liang's lawyers said the shooting was a "million-to-one" occurrence, calling it a tragic accident that nevertheless did not amount to a crime.

They also emphasized the dangers of so-called "vertical patrols," a point that was underscored when two officers were shot this month when conducting a similar patrol in a Bronx public housing building.