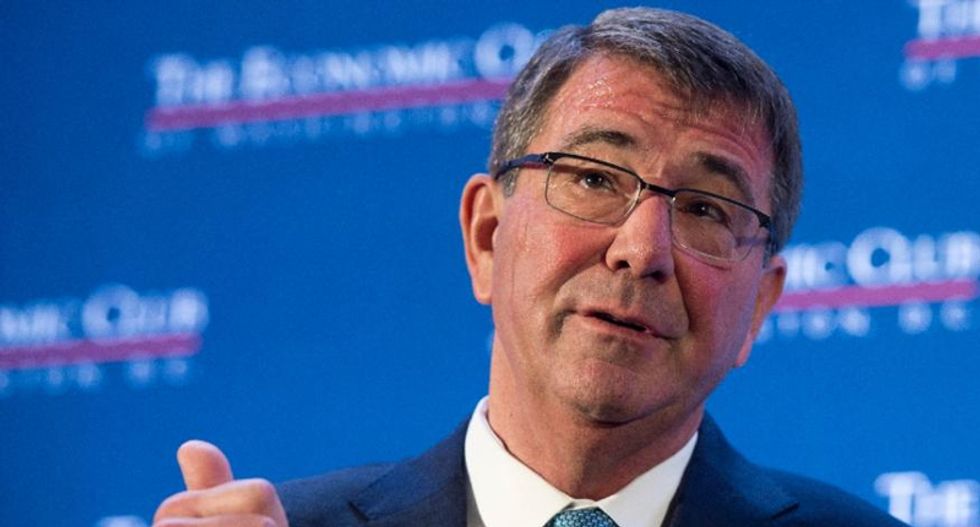 US Secretary of Defense Ashton Carter speaks about the Pentagon budget on February 2, 2016 (AFP Photo/Saul Loeb)

US forces have fired so many smart bombs at Islamic State targets that stocks of the sophisticated weapons are dwindling, Defense Secretary Ashton Carter said Tuesday as he previewed the Pentagon's enormous budget.

American drones and warplanes are at the forefront of an 18-month-old coalition effort to fight the IS group in Iraq and Syria, in a campaign that has so far seen some 10,000 air strikes, many of which the Pentagon says were carried out with pinpoint accuracy.

"We've recently been hitting ISIL with so many GPS-guided smart bombs and laser-guided rockets that we're starting to run low on the ones we use against terrorists the most," Carter said, using an acronym for the IS group.

The munitions buying spree -- a boon to America's massive defense contractor industry -- is one component of a significantly expanded funding allocation to fight the IS group.

For fiscal year 2017, which begins in October, Carter has budgeted $7.5 billion -- a 50 percent increase from the previous year -- to fund the campaign.

The extra money indicates not just a continued bombing campaign in Iraq and Syria, but the possibility of an expanded fight against the jihadists as they reach beyond their so-called caliphate into other chaotic regions such as Libya.

The total US defense budget for fiscal year 2017 would be nearly $583 billion, Carter said, far surpassing that of any other country and exceeding the combined defense spending of the next eight biggest militaries in the world.

The proposed budget, which will be released in full next week and is still subject to congressional haggling and approval, also includes $3.4 billion -- quadruple last year's amount -- for operations in Europe.

The cash will fund the so-called European Reassurance Initiative that aims to deter Russia from carrying out additional land grabs after its 2014 annexation of the Crimean Peninsula.

"We're reinforcing our posture in Europe to support our NATO allies in the face of Russia's aggression," said Carter, who is traveling to Brussels next week to meet with 26 defense ministers from the military alliance.

"That'll fund a lot of things. More rotational US forces in Europe, more training and exercises with our allies, more prepositioned warfighting gear, and infrastructure improvements to support it."

NATO Secretary General Jens Stoltenberg welcomed news of a beefed-up US presence in countries close to the Russian border.

"This is a clear sign of the enduring commitment by the United States to European security," he said in a statement.

"It will be a timely and significant contribution to NATO's deterrence, and collective defense."

- A glimpse into the future -

Carter, a physicist and former Harvard University professor who delights in the US military's innovation in high-tech areas, also offered a glimpse into some of the more futuristic projects that will benefit from American taxpayer cash.

In all, the budget proposes $71.4 billion in research and development funds.

He said a project being developed by the Pentagon's Strategic Capabilities Office has created tiny, swarming drones that are built largely from components created by 3D printers.

"They can fly through heavy winds and be kicked out the back of a fighter jet moving at Mach 0.9... or they can be thrown into the air by a soldier in the middle of the Iraqi desert."

Pentagon researchers are also developing small bombs that use cameras and sensors to improve their targeting capabilities.

Among the projects are robot boats and a hyper-velocity gun -- known as the electromagnetic rail-gun -- that can blast a projectile out at an astonishing 4,500 miles (7,250 kilometers) per hour.

Carter said he worries about future conflicts expanding into space, and said the Pentagon is developing ways to mitigate any threats.

"While at times in the past, space was seen as a sanctuary, new and emerging threats make clear that's not the case anymore, and we must be prepared for the possibility of a conflict that extends into space," he said.

But amid the talk of micro-drones and space fighting, Carter also acknowledged that old-fashioned warfighting taking place against IS jihadists in Syria and Iraq means the Pentagon is shelving plans to retire its A-10 ground-attack "Warthog" planes, originally developed in the 1970s.

US ground forces love the distinctive sound of the highly maneuverable plane's massive cannon, which can drench a target with high-caliber firepower at a rate of about 70 rounds per second. The plane will now keep flying until 2022.