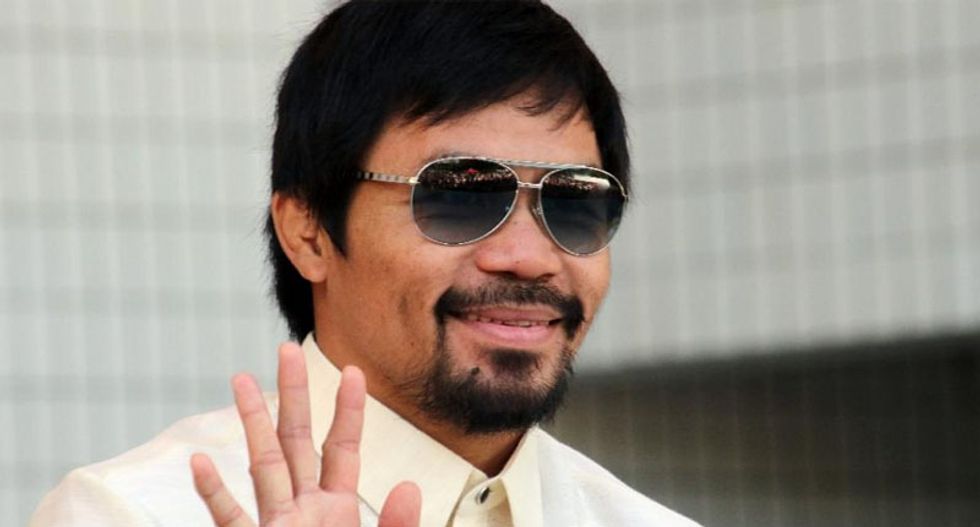 The Philippine Catholic church on Sunday defended boxing hero Manny Pacquiao for his opposition to gay marriage, saying he was only quoting the Bible.

But Father Jerome Secillano also said over radio station DZMM that Pacquiao should respect homosexuals and not judge and condemn them after the eight-division world champion last week described them as worse than animals.

Pacquiao, 37, who converted from Catholicism to an evangelical Protestant faith late in his boxing career, was pilloried by local gay rights groups and celebrities and has lost lucrative commercial endorsements as a result.

Secillano, executive secretary of the Catholic bishops' public affairs office, said: "This is really in the Bible. There is this quote he (Pacquiao) uses from the Bible and we cannot change that."

He said it was "unfair" to condemn Pacquiao for echoing what he reads in the Bible when he was asked about same-sex marriage.

But Secillano also said the boxing hero should not have used such offensive language.

He reiterated that the Catholic church, which counts 80 percent of Filipinos as followers, still opposed legalisation of same-sex marriage.

Church influence has also kept divorce and abortion from being legalised in the Philippines.

However homosexuality is not criminalised and several LGBT figures have become celebrities.

Pacquiao, who intends to retire after his April fight against American Timothy Bradley to pursue a career in politics, issued an apology on social media on Tuesday but later said his apology was qualified.

Nike, Pacquiao's major global sponsor, cancelled its endorsement deal with him in the past week, describing his comments as "abhorrent".

Pacquiao, a former street kid with little education, has used his fame and fortune to launch a political career.

Already a two-term congressman, he is campaigning to win a Senate seat in May elections. Surveys published before the controversy indicated he will win.

Pacquiao has said his ultimate ambition is to be president of the Philippines.