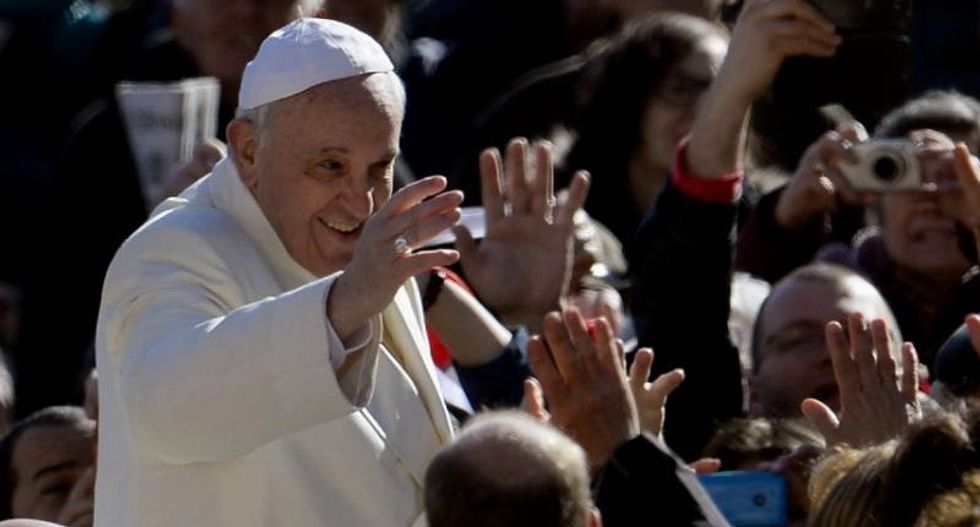 Pope Francis defended the Catholic Church's record on tackling the sexual abuse of children by priests, saying "no-one else has done more" to root out paedophilia (AFP Photo/Andreas Solaro)

A British paedophilia survivor who has been asked to step down from a Vatican panel on the issue told AFP on Monday that he felt betrayed by Pope Francis.

"Of course Pope Francis has established he is part of the problem," Peter Saunders said in an interview with AFPTV, during which he insisted he had not resigned and that only the pontiff himself could force him to quit the Vatican commission.

"That breaks my heart because when I met him 18 months ago I thought there was a sincerity and a willingness to make things happen, and I am afraid that has been dashed now."

Saunders, the head of Britain's National Association for People Abused in Childhood, was personally asked to join the panel by Pope Francis.

His involvement, along with fellow survivor Marie Collins, helped burnish its credentials as a symbol of the Church tackling the abuse head-on.

But Saunders now says he realises the commission was always going to be about "smoke and mirrors" and that he is convinced the Church will never act alone to cure the "cancer" in its midst.

The Vatican confirmed earlier on Monday that Saunders, 58, had been asked to step down from the commission because of disagreements over whether the 17 members should get involved in individual abuse cases brought to the Church's attention.

Saunders said the move was triggered by tensions that arose after a fellow commission member told him about being approached by two priests from an Italian diocese who had discovered a colleague was a serial abuser of children.

"I have always said I will speak my mind and exercise my right of free speech and that really isn't compatible with the way the Church and the Commission operates," Saunders said.

"It is also at the heart of why abuse within the Church is still so rampant and widespread."

Saunders said the whistle-blowing priests in the Italian case had been told to stay silent by their bishop and referred back to the prelate by local police.

The case has since been referred to the Vatican for further investigation.

"Now, I find that beyond unacceptable that men doing the right thing protecting children should both be sent away by the police but more significantly and sinisterly... to be told by their boss, the bishop, they must do nothing and to remain silent," Saunders told AFP.

He said he accepted the commission's remit was not to deal with live cases.

But he added that child abuse would never be tackled "as long as we just sit around the table talking about how we should better recruit priests in the future or how we look at updating canonical law, because these are the kind of discussions the commission is having.

"Some of the work they we are doing is very valuable, but it ain't stopping kids being raped now.

"When we hear about something like that, we have to act -- and as a parent, it breaks my heart when I hear of serious allegations of abuse that are not going to be tackled."

Saunders said the notion that clerical sex abuse was a problem of past decades -- an argument Vatican officials have assiduously promoted -- had to be challenged.

"This is not in any sense a historical issue or problem," he said. "It has to be tackled now. The Pope could do so much more and he is doing next to nothing.

"This is a societal problem -- but if the Church, the so-called moral leadership of the world, does not take a lead in this area it would quite rightly be considered morally bankrupt in every other area."