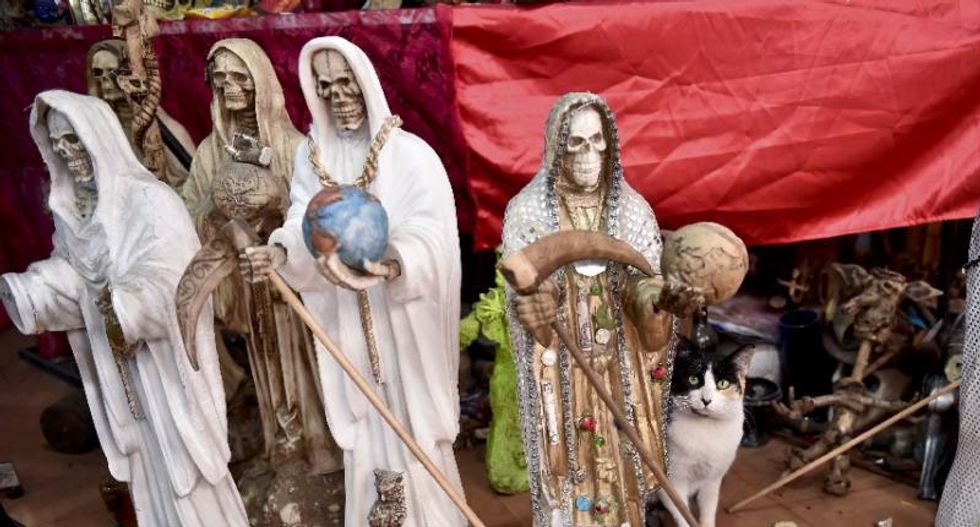 Two weeks after baptizing her at a Catholic church, baby Adriana's parents put her in a white gown again for a second sacrament: This time, with Mexico's skeletal "Death Saint."

As they held the sleepy three-month-old child, a priestess sprinkled holy water infused with rose petals on her in front of 300 people under a 22-meter (72-foot) statue of the Grim Reaper-like "Santa Muerte" in a Mexico City suburb.

When Pope Francis arrives in Mexico for a five-day visit on Friday, he will find a country where devotion to Santa Muerte is growing fast despite the Vatican's rejection of the figure as blasphemous.

Every Sunday, a big crowd comes to Enriqueta Vargas' outdoor temple in Tultitlan to pray in front of the black fiber-glass statue, which was erected in 2007 in a lot and can be seen from a busy boulevard.

They leave tequila, candy and flowers at six chapels, where they pray for love, money or health. Vargas has gone a step further than at other Santa Muerte shrines in Mexico by officiating over weddings and baptisms.

Adriana's young parents, Daniel Anguiano and Lucero Aguilar, had pleaded for help from Santa Muerte during complications in the pregnancy.

"I promised her that if she gave our daughter to me in good health, I would come here in front of her to baptize her," said Anguiano, a 22-year-old Corona beer company worker.

Like many worshippers of Santa Muerte, Daniel and Lucero, 18, remain Catholic despite the Vatican's hard line against it.

"Santa Muerte is an absurdity," Cardinal Norberto Rivera, Mexico's archbishop, told AFP. "Every Christian should be in favor of life, not death."

But the Church is losing the battle against the Death Saint, which is famous for being worshipped by drug cartels but is followed by a wider sector of Mexican society, from the poor to blue-collar workers, police, doctors and teachers.

Journalists are "always looking for criminals but they never find them," Vargas said before leading a mass-like ceremony in which people stood, kneeled and invoked the Death Saint while also reciting "The Lord's Prayer" of Christian faith.

That leaves the Roman Catholic Church worried in Mexico.

"This is the fastest-growing new religious movement not only in Mexico, but in the entire Americas," Chesnut, author of "Devoted to Death: Santa Muerte, the Skeleton Saint," told AFP.

Historians trace Santa Muerte to the late 18th century, when indigenous populations turned Spanish images of the Grim Reaper into an icon, prompting the Church to destroy chapels devoted to the folk saint.

After that, the skeleton went underground until anthropologists found devotees again in the 1940s -- mostly women asking Santa Muerte to get rid of their husbands' mistresses, Chesnut said.

The number of worshippers soared from 2001, when another woman named Enriqueta, "Dona Queta" Romero, displayed her Santa Muerte figure in Mexico City's rough neighborhood of Tepito.

Now, a steady stream of people come to her altar every day to kneel and pray for help from Santa Muerte. A crowd attends a massive ceremony on the first day of each month.

"On one hand I have God, and on the other I have Death. And when I die, God will tell the skinny one to take Dona Queta away," said the 70-year-old great-grandmother.

The caretaker of Tultitlan's outdoor temple, Enriqueta Vargas, is a more recent convert to Santa Muerte.

She became the leader of the place of worship after her son, who founded the temple, was gunned down in 2008.

"I promised Santa Muerte that if she delivered my son's assassins, I would seek to take her message as far as possible," Vargas told AFP.

Felix Lugo, 74, believes that Santa Muerte made him fall in his bath in 2013, causing leg injuries, as punishment because he had hoped that a neighbor would fail to build a shrine in her honor.

"I'm here to ask for forgiveness. I feel like I offended her," said Lugo, a Catholic follower of Mexico's patron saint, the Virgin of Guadalupe.

He wanted to know if he could worship both icons.

"Of course you can," Vargas told him.