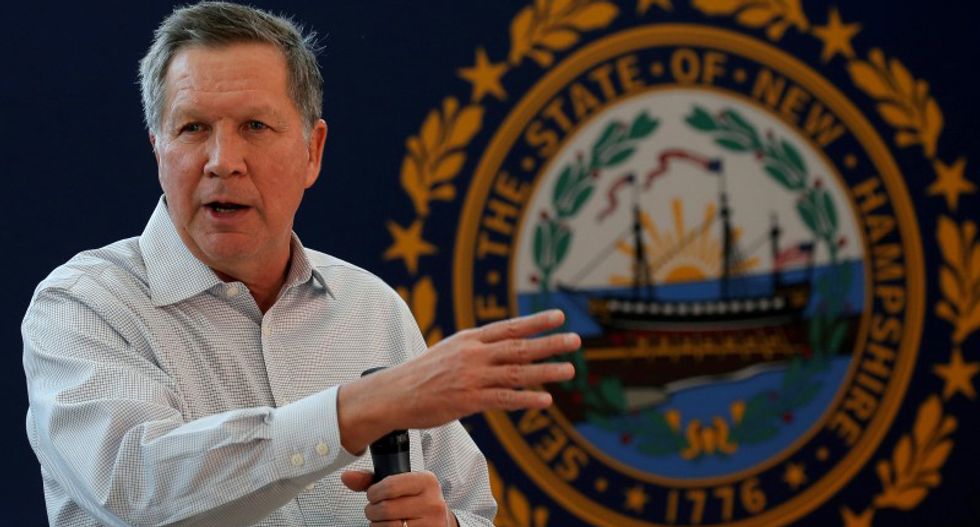 U.S. Republican presidential candidate John Kasich is polling in the low single digits nationally but may be poised to play the role of spoiler in Tuesday’s New Hampshire primary by cutting into the support of higher-profile rivals such as Marco Rubio.

The Ohio governor, who is vowing to erase the U.S. budget deficit without shredding the safety net for poor Americans, has built a base of support among moderate Republicans and independent voters, who wield special clout in New Hampshire because they can vote in either party's primary.

Kasich, 63, has the support of about 12 to 14 percent of New Hampshire’s voters in recent polls. The former congressman has staked the viability of his White House aspirations on New Hampshire, whose pivotal primary is part of the state-by-state contests to pick the party nominees for the Nov. 8 election to replace Democratic President Barack Obama.

While well behind billionaire real estate mogul Donald Trump, Kasich's poll numbers are close to those of Rubio, a U.S. senator from Florida who is seeking to build on his momentum after a third-place finish in last Monday's Iowa caucuses behind Trump and winner Ted Cruz, a U.S. senator from Texas.

“I found great clarity here in New Hampshire,” Kasich said on Sunday in Concord. “These town halls, you know, they’re getting bigger and I don’t know how I feel about them getting bigger.”

The event marked his 102nd town hall in the state. For the 100th, in Bedford on Friday, the campaign celebrated with confetti and a cake that was served to voters attending the event.

Kasich told stories of personal connections he said he had made with voters at town halls, including with a woman whose daughter has struggled with addiction.

“She said: ‘My daughter has been sober for 11 months,’" Kasich said, asking the crowd: "Do you have any idea what this lady’s life is like?'"

He added he had promised to call the daughter and tell her: “Your mom is counting on you.”

But among New Hampshire voters, a Monmouth University poll released on Sunday found Kasich at 14 percent, compared with 30 percent for Trump and 13 percent for Rubio and former Florida Governor Jeb Bush.

Rubio was criticized last year by Republican strategists who said he had not done enough to woo voters in New Hampshire in intimate settings such as coffee shops and town halls. This year, however, he has campaigned intensively in the state and often holds town halls.

But Rubio came under heavy attack in the Republican presidential debate on Saturday from rivals who accused him of being too inexperienced for the White House.

Kasich delivered a positive message during the debate that could appeal to New Hampshire Republican voters, who famously make up their minds late and never seem in the mood to follow the lead of the Iowa caucuses.

Some of Kasich’s supporters are passionate about him.

"It's authenticity, brother. You have my vote," one man told him at the Bedford town hall.

Others were weighing their options.

Tim Vanblommesteyn, 62, who attended the Kasich town hall in Concord, said he was “disgusted” with both political parties but liked some of what the Ohio governor had to say.

The small-business owner and self-described independent praised Kasich for taking what he said was a “principled stand” on immigration reform, an issue that has aroused fiery campaign rhetoric, including from Trump, who has called for deporting illegal immigrants.

Kasich has said the United States should secure its borders but that illegal immigrants who have not committed a crime should be able to pay back taxes and get on a path to legalization.

Anne Brena, 53, a Democrat from neighboring Vermont, said she came to the Concord event to learn more about the governor.

Brena said she thought Democrat Bernie Sanders, a U.S. senator from her home state, was too liberal to win the general election and she has concerns that his rival, former Secretary of Stat Hillary Clinton, has too much “baggage” to win the White House.

“John Kasich is the only Republican that sounds reasonable,” she said.