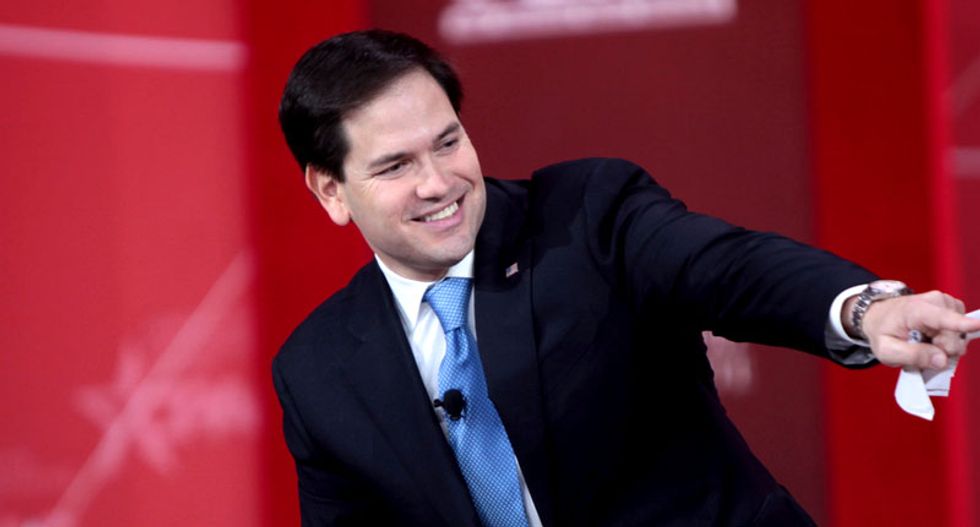 US Republican and Democratic candidates made last-gasp appeals to Iowa voters just hours before the first nominating contest of the 2016 campaign, with their White House aspirations on the line.

By late Monday, presidential hopefuls will learn whether the time, effort and money they poured into their campaigns have been rewarded with the kind of strong showing here that would lend huge momentum to their cause when the race shifts toward the next vote, in New Hampshire.

Republican Donald Trump and Democrat Hillary Clinton both were leading in the polls, but not by enough to assure victory for either candidate in Monday's caucuses.

Will an establishment Republican -- Marco Rubio, perhaps -- outperform the polls and make it a three-way race with Trump and conservative Ted Cruz?

And will self-declared Democratic Socialist Bernie Sanders convert the excitement about his political revolution into enough votes to upset Clinton's second shot at history?

Iowa -- and early momentum in the presidential race -- is up for grabs.

Throwing a wrench in the works, forecasters say a major winter storm is brewing in the west, threatening to bring snow and a dangerous wintry mix to parts of Iowa just as residents are caucusing.

Armies of volunteers fanned out through the Midwestern state Sunday, knocking on doors or manning phone banks to get out the vote, while candidates dominated the air waves with talk show appearances and a relentless barrage of campaign ads.

Most of the 12 Republicans and three Democrats in the race were holding several weekend events to press the flesh and win over voters.

By evening, several leading candidates were rallying their faithful, pleading with them to defy snow or freezing rain and bring friends and neighbors to caucus.

Clinton, seeking to stave off a surge by Sanders, was leaving nothing to chance, stumping in the heartland this weekend and warning that the policy proposals of her main rival were pie-in-the-sky idealism.

"I don't think America can wait, I don't think it can wait for ideas that sound good on paper then can't go through the gridlock," Clinton told about 2,600 people at a rally in a Des Moines high school.

Sanders, a senator from Vermont, declared his race with Clinton a "tossup."

A Bloomberg/Des Moines Register poll published late Saturday put Clinton just ahead of Sanders in Iowa, 45 to 42 percent, within the four percent margin of error.

"I like Bernie Sanders too," she said. "My question is, would he be able to win?"

The billionaire businessman had the support of 28 percent of voters, with Cruz at 23 percent. But Cruz might have the upper hand, because core conservatives -- his bread and butter -- are the most dedicated caucusers of the lot in Iowa.

"We are on the cusp of something remarkable," Cruz, brimming with confidence, told a rally of more than 1,000 supporters.

"All over this country people are waking up, and help is on the way!"

Lurking in third was Senator Marco Rubio with 15 percent, and his star has risen in recent weeks.

If Rubio makes a strong showing in Iowa, he would emerge as the top mainstream Republican heading into the first-in-the-US primary, to be held February 9 in the northeastern state of New Hampshire.

Sanders has energized young Democrats with his denunciations of the "billionaire class" and his calls for a political revolution.

The thousands of students who fill his rallies could produce an upset, if they show up to caucus.

"If the turnout is high, I think we've got a real shot to win this," Sanders told CNN's "State of the Union" program.

His campaign said it raised more than $20 million in January, nearly doubling its previous fundraising pace and underscoring an ability to stay in the nominations race for the longer haul.

Cruz said he was praying for his rivals as he worshipped at an evangelical mega-church in West Des Moines.

Trump also courted evangelicals, who are expected to play a huge role -- they comprised 57 percent of caucus voters in 2012.