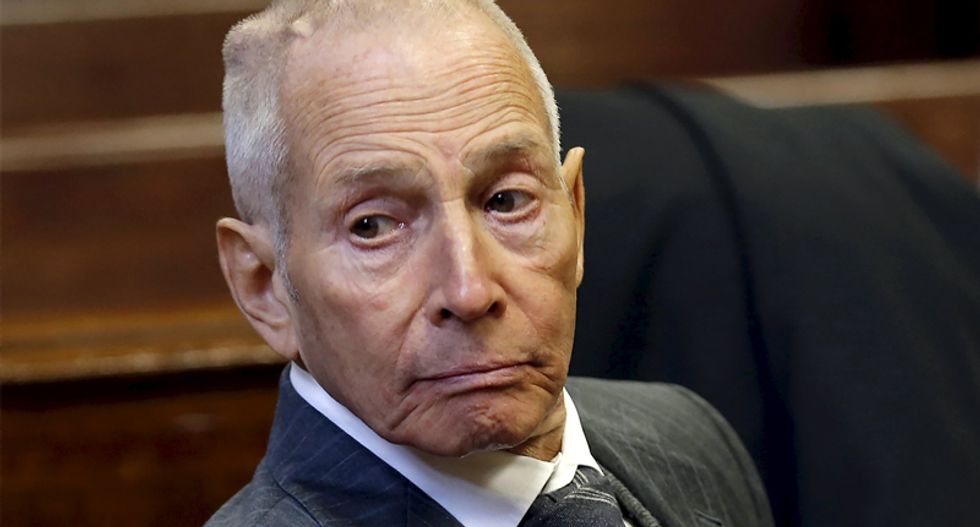 Real estate heir Robert Durst appears in a New York criminal courtroom for his trial on charges of trespassing on property owned by his estranged family, in New York in this December 10, 2014, file photo. REUTERS/Mike Segar/Files

Real estate heir and murder suspect Robert Durst is set to plead guilty to a federal gun charge in New Orleans on Wednesday, his lawyer said, setting the stage for his return to California to face charges in the 2000 death of a longtime friend.

Durst, 72, is expected to appear before U.S. District Judge Kurt Engelhardt on Wednesday morning. Durst was charged with being a felon in possession of a firearm after a search of his New Orleans hotel room last March turned up a handgun.

He initially pleaded not guilty to the charge, claiming the search was illegal. His arrest came one day before the series finale of a 2015 HBO documentary entitled, "The Jinx: The Life and Deaths of Robert Durst."

The show chronicled several police investigations of the multimillionaire, including the 2003 dismemberment killing of a male neighbor in Texas for which he was acquitted of murder, and the 1982 disappearance in New York of his wife, Kathleen.

Durst's lawyer, Dick DeGuerin, said on Tuesday that his client will enter a guilty plea to the gun charge, which could set in motion the legal steps for his move to Los Angeles.

Prosecutors there want him in connection with the 2000 killing of writer Susan Berman. Durst's lawyer has said he is eager to prove his innocence.

"It will take a while for all the pieces to fall into place, but the agreement is that he will be moved sometime in the spring or summer," DeGuerin said, adding he aims to have Durst in California by August.

Durst has been jailed in Louisiana since his arrest at a Marriott hotel, where authorities said he was staying under an assumed name with $42,000 in cash, a revolver, about five ounces of marijuana and a latex mask.

He faces a sentence of up to 10 years in prison on the firearm charge, based on his 2004 conviction for jumping bail and carrying a weapon across state lines as he tried to flee a murder prosecution in Texas.

In the final episode of the HBO series, he was presented with evidence of his handwriting appearing to match that of Berman's likely killer. Durst's voice was captured on a microphone after the interview saying he had "killed them all."

Durst has long been estranged from his family, known for its significant New York real estate holdings. Prosecutors say he is worth some $100 million.