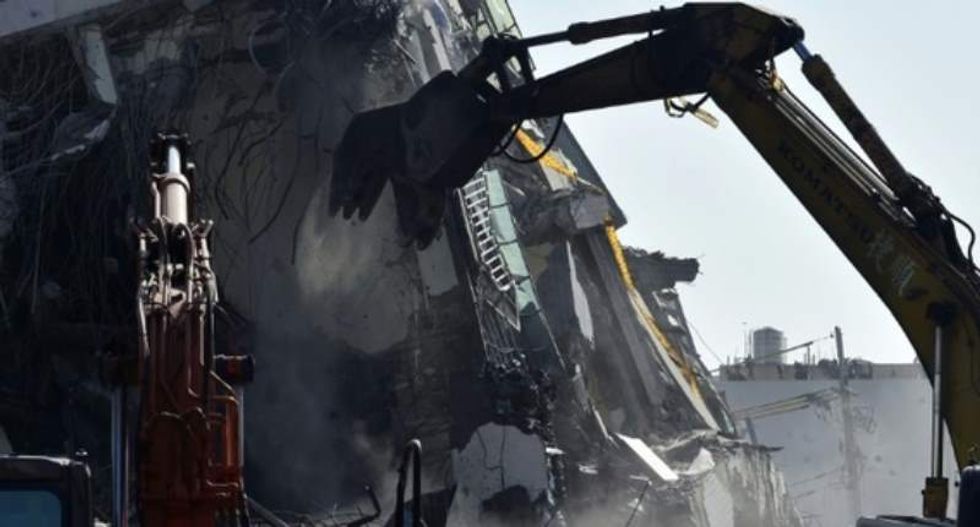 Rescuers deployed heavy machinery in a renewed effort to locate more than 100 people trapped in the rubble of a Taiwan apartment complex felled by an earthquake. (Sam Yeh/Agence France-Presse)

Rescuers deployed heavy machinery Tuesday in a renewed effort to locate more than 100 people trapped in the rubble of a Taiwan apartment complex felled by an earthquake as the 72-hour "golden window" for finding survivors passed.

More than 210 have been pulled from the 16-storey Wei-kuan building -- the only high-rise in the southern city of Tainan to crumble completely when the 6.4 magnitude quake struck before dawn Saturday, killing more than 40 people.

But the city government and rescuers estimated more than 100 others could still be buried in the rubble.

"It's approaching the 73rd hour and relatives are getting more anxious as time passes by and expect more. They hope the rescue team can make further moves," he said at the scene early Tuesday.

Use of heavy machinery had been repeatedly delayed after rescuers detected signs of life in upper parts of the toppled structure.

There have been some dramatic rescues, including a eight-year-old girl and three others pulled from the wreckage Monday.

While the rescue operation was underway, the island was jolted by a 4.9-magnitude quake off the eastern city of Hualien city, but no damage or casualties were reported.

President Ma Ying-jeou said Monday there was still hope of survivors, even beyond the 72-hour window.

"We will carry on until the last second. The golden 72 hours of rescue is the standard but there are many exceptions," said Ma after visiting two survivors in hospital with bone fractures.

Cranes, drills, ladders, sniffer dogs and life detection equipment are being used to locate those trapped, but emergency workers and soldiers have also had to shore up the ruins to avoid further tragedies.

Prosecutors have launched an investigation into the collapse of the building.

The quake struck the weekend before Chinese New Year, when many relatives would have joined families to enjoy the holiday.

Taiwan lies near the junction of two tectonic plates and is regularly hit by earthquakes.

The island's worst tremor in recent decades was a 7.6 magnitude quake in September 1999 that killed around 2,400 people.