Right-wing German party: Police should be able to shoot migrants 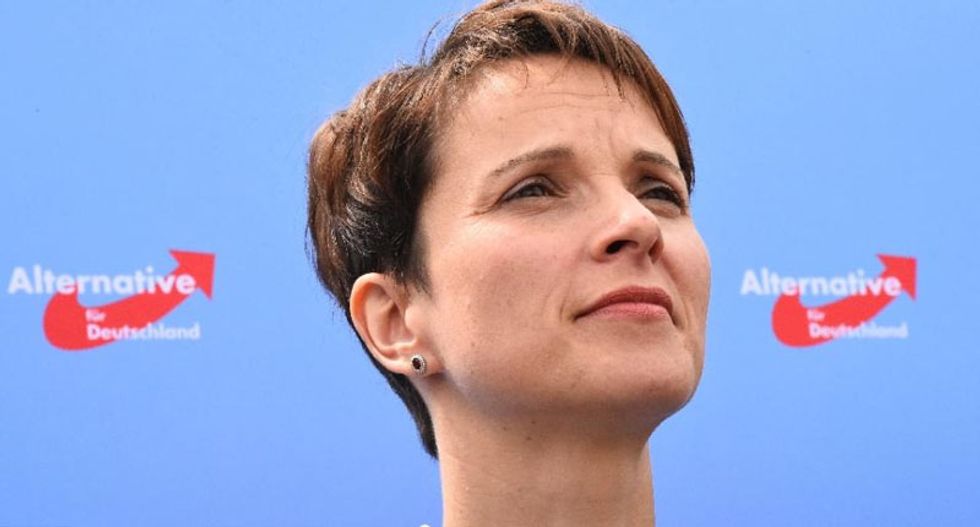 Chairwoman of the German Alternative fuer Deutschland party Frauke Petry, seen in Berlin on July 10, 2015, argues that border police need "to have recourse to their firearms" (AFP Photo/Tobias Schwarz)

Germany's eurosceptic right-wing populist AfD party created a storm Saturday by suggesting police "if need be" should threaten to shoot migrants seeking to enter the country.

"We need efficient controls to prevent so many unregistered asylum-seekers keeping on entering via Austria," said party chairwoman Frauke Petry, in comments carried by the Mannheimer Morgen regional daily.

Border police "should be able if need be to have recourse to their firearms -- as laid down by law," the paper quoted Petry as saying.

"No policeman wants to fire on a refugee and I don't want that either. But as a last resort there should be recourse to firearms," said Petry in comments which drew a storm of criticism.

"No policeman would be ready to fire on" migrants, police union GdP said in a statement.

"Whoever wants to deploy such methods clearly wants to suspend the rule of law," said GdP head Joerg Radek.

"We have already seen that over the course of German history and we don't ever want to go down that road again," Radek said.

The head of the main opposition Social Democrat parliamentary group, Thomas Oppermann, blasted "an unacceptable mobilisation of public opinion against refugees while opposition Green Party lawmaker Konstantin von Notz blasted Petry as "irresponsible," not least given a spate of recent attacks on some refugee centres.

Notz said Petry was engaging in "extreme right-wing terrorism" with her comments ramping up anti-refugee rhetoric in a country that has received more than one million migrants in the last year.

AfD, meaning Alternative for Germany, was created as a eurosceptic platform in 2013 but has since veered sharply even further to the right, with some of its leaders voicing support for the anti-Islamic PEGIDA protest movement.

Recent polls give 13 percent support for the group, making it Germany's third-strongest political force behind the ruling Christian Democrats and the coalition partner the Social Democrats.