Right-wing scold Phyllis Schlafly wants baseball to look like it did in 1944: ‘American players are better’ 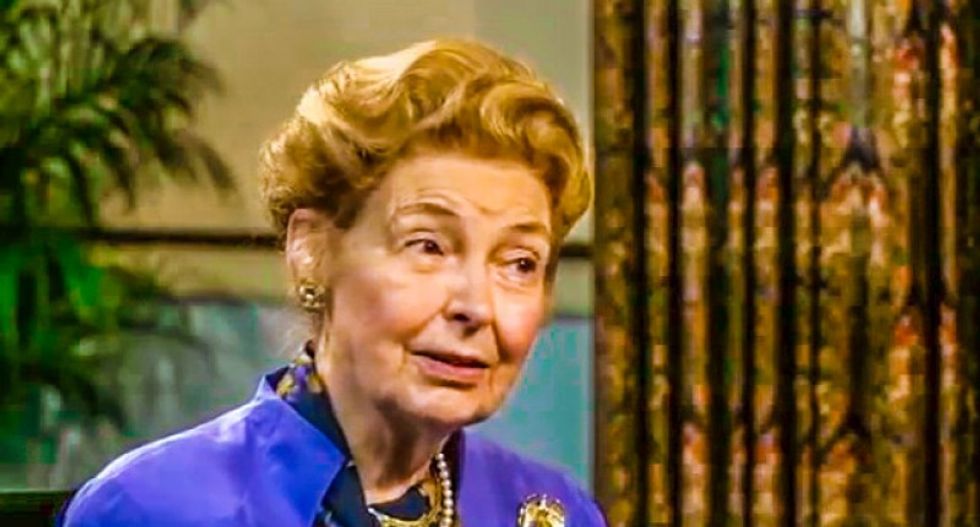 Conservative activist Phyllis Schlafly wants to return to baseball's good old days -- which she pinpoints as 1944 -- and ban foreign-born players from playing professionally in the U.S.

The 91-year-old author and retired attorney established her baseball bona fides by recalling when she attended the World Series between the St. Louis Cardinals and St. Louis Browns during the second-to-last year of World War II, when many of the best players were serving overseas and three years before Jackie Robinson broke the color line.

She pointed out that all six of the recipients of Major League Baseball's top awards were native-born Americans, although the American League MVP plays for a Canadian team and the AL's rookie of the year was born in Puerto Rico.

"More than a quarter of Major League Baseball players are foreign-born, with whom our youth are less likely to identify," Schlafly argued. "Some of these players cannot speak English and they did not rise through the ranks of Little League."

Schlafly appears to be cherry-picking her data, because Venezuelan Miguel Cabrera won the AL MVP two years in a row in 2012 and 2013, and two Cuban-born players, Jose Abreu and Jose Fernandez, were named their respective leagues' rookie of the year in 2014 and 2013.

Six of the 20 players selected by fans to start last year's All-Star game were born outside the U.S.

Using jersey sales as another measurement of popularity, fans do identify with foreign-born players -- with Hernandez and the Dominican-born Albert Pujols, winner of the National League MVP award in 2005, 2008 and 2009, and David Ortiz ranking the top 20.

"These foreign-born players enter on visas and take positions that should go to American players," Schlafly argued. "Fewer than four percent of the Baseball Hall of Fame is foreign-born, yet 27 percent of today's players are foreign-born."

Today's foreign-born players would not have been allowed to play Major League Baseball in the days when many of those Hall of Fame players compiled their statistics, because only whites were allowed to play.

"This foreign influx into our National Pastime may help explain why our youth is abandoning baseball," Schlafly said. "Youth who play baseball have declined by more than 40 percent since 2000, and some communities where baseball was once booming now struggle to fill their teams. Television ratings for World Series games are less than half what they were three decades ago."

Participation in all sports has dropped 9 percent in the last five years, and many children stop playing baseball at a younger age because the participation cost rises steeply along with the required skill level.

But there is little evidence to suggest foreign-born professional players have anything to do with dampening enthusiasm for Major League Baseball -- which is enjoying record-high revenue and strong attendance.

"Baseball owners are doing the same thing that big corporations do: Bring in foreign labor to take jobs that ought to go to Americans," Schlafly said. "American baseball players are better, as the awards and Hall of Fame prove, but perhaps baseball owners think that foreign players are cheaper and easier to control."

MLB's 30 clubs spent $160 million last year to sign 801 international players, up from $95 million the year before, and teams routinely spend tens of millions of dollars to obtain negotiating rights with the best Japanese professional players.

American-born players are subject to a draft, where the teams with the worst records pick first and signing bonuses are more strictly regulated -- and some players, agents and baseball officials have suggested major changes to the way teams acquire amateur talent.

Some have called for an international draft, while others have argued that the amateur draft be abolished altogether and let all players sign with the highest bidders.

But neither of those arguments are quite the point Schlafly is trying to make.

"It is time to cut off visas for foreign baseball players, and return our national pastime to Americans," she said.