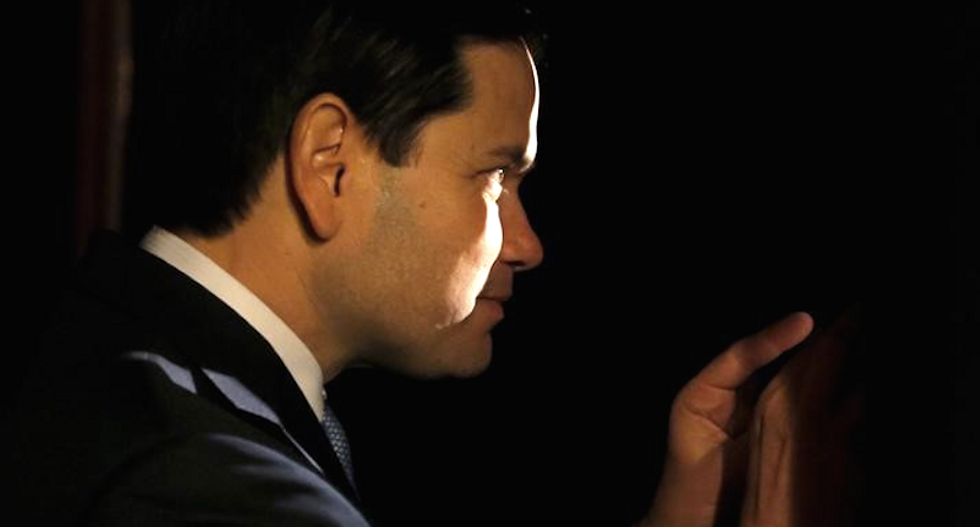 U.S. Republican presidential candidate Marco Rubio parts the curtains to view the crowd before being introduced during a campaign event in Reno, Nevada February 22, 2016. (REUTERS/Chris Keane)

Republican presidential candidate Marco Rubio is looking to outpoll rival Ted Cruz in Nevada's caucus on Tuesday to help bolster his position as the establishment favorite for his party's nomination for the Nov. 8 election.

Looming over the tight race between the two first-term Cuban-American U.S. senators is Republican front-runner Donald Trump, the billionaire businessman who has won two of the first three state nominating contests and is expected to dominate the field in Nevada.

With Trump, a blunt-spoken political outsider, commanding a double-digit lead in a handful of Nevada polls, political strategists in the state said Rubio and Cruz were both aiming lower, each hoping for a clear win over the other that could propel them through the busy voting month of March.

A recent CNN/ORC poll put Trump ahead by 26 percentage points in Nevada at 45 percent support, followed by Rubio, from Florida, at 19 percent and Cruz, from Texas, at 17 percent.

Kasich, who finished second to Trump in the Feb. 9 New Hampshire primary, kept his focus on bigger states including Michigan and Virginia, where he campaigned on Monday, hoping to gain support there among mainstream Republicans.

The rivalry between Rubio and Cruz, who won the Iowa caucuses on Feb. 1, has intensified as both seek a boost going into the nominating contests in a dozen states on March 1, known as Super Tuesday.

Rubio, 44, gained some momentum on Saturday when he edged out Cruz, 45, by fewer than 1,000 votes for second place in South Carolina's Republican primary. Strategists said he also benefited from the withdrawal from the race of one-time establishment favorite Jeb Bush, some of whose donors were preparing to shift to Rubio.

The Cruz campaign suffered a setback on Monday when the candidate fired his main spokesman for posting a video that falsely showed Rubio dismissing the Bible.

For Rubio, the son of former casino workers who spent six years in Nevada as a child and young teenager, the focus is on securing the support of mainstream Republicans and playing up his ties to the region.

"He's not pushing it hard, like, 'I'm really a Nevadan,'" said Eric Herzik, a political science professor at the University of Nevada-Reno. "But both he and his surrogates have highlighted he has the best understanding of Nevada because he actually lived here."

Expectations could mean less in Nevada, a state geographically larger than others that have held nominating contests this year, because of the notorious difficulty of conducting polls there. Pollsters face challenges posed by the amount of voters living in rural areas and difficulties in gauging voter turnout.

Ralston estimated only 8 percent to 10 percent of eligible voters may turn up to caucus on Tuesday - or somewhere between 33,000 and 42,000 people, according to data from the Nevada secretary of state on registered Republican voters.

Part of that is a lack of organization. The state Republican Party switched from the more voter-accessible primary system for the 2008 election campaign, and there are concerns the caucus could be plagued by technical glitches and logistical challenges.

"It's a goofy Republican caucus on a Tuesday night, with different start times for voting in different counties and an inept state party," Ralston said.

(Reporting by Megan Cassella in Washington; Editing by Peter Cooney)