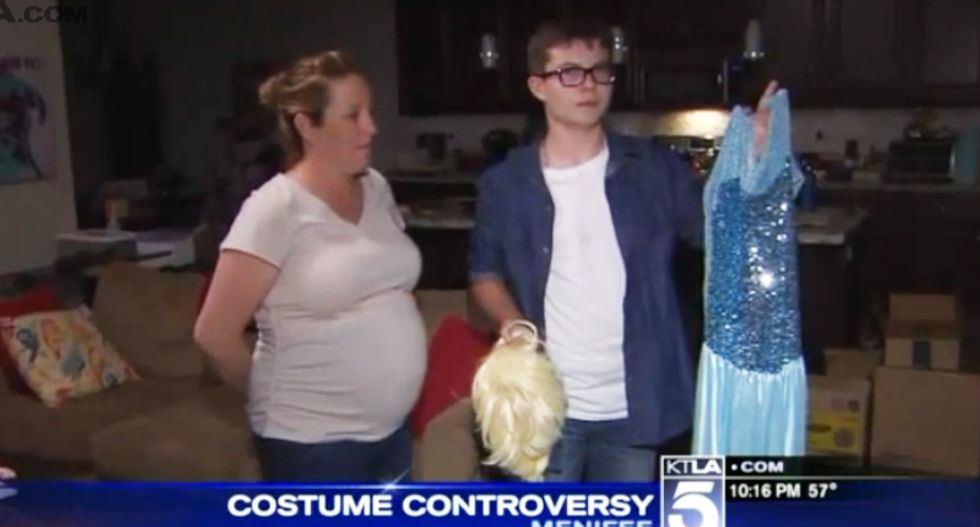 A California middle school student who thought it would be fun to dress up as Elsa from the film "Frozen" on "Disney Day" at his school, drew the ire of the school's principal who ordered the costume confiscated, reports KTLA.

According to the mother of 13-year-old Austin Lacey, the principal of Ethan Chase Middle School in Menifee said the costume was inappropriate and that he "does not believe that boys should be dressed like girls."

Students at the middle school were encouraged to dress as Disney characters for Thursday's school spirit day, but Lacey's decision to go as Elsa was not met with approval by the school administrator.

"I never expected what happened today to happen," said Lacey , adding, " I wore it for fun. I'm just one of those people who likes to go all out."

According to the student, the principal told him the costume "attracted too much attention," and sent a campus supervisor to confiscate his costume and wig.

According to Lacey's mother, Brooke Francev, "He was later informed that the principal does not believe that boys should be dressed like girls."

"I can't believe that there are still people out there that hold those beliefs, especially on a day when it was all intended in good fun," Francev said before adding, "My son. personally, he's not a transgender student. But through this he's really taken a stand on the rights that all people have."

According to a statement from the Romoland School District: "This action was taken in accordance with district policies. At no time was there an indication that the student was expressing any particular message. The Principal's action was based upon the need to stop a general disruption to the school environment."