Seth Meyers warns Trump: If you f*ck with the Bushes then Cheney might shoot you 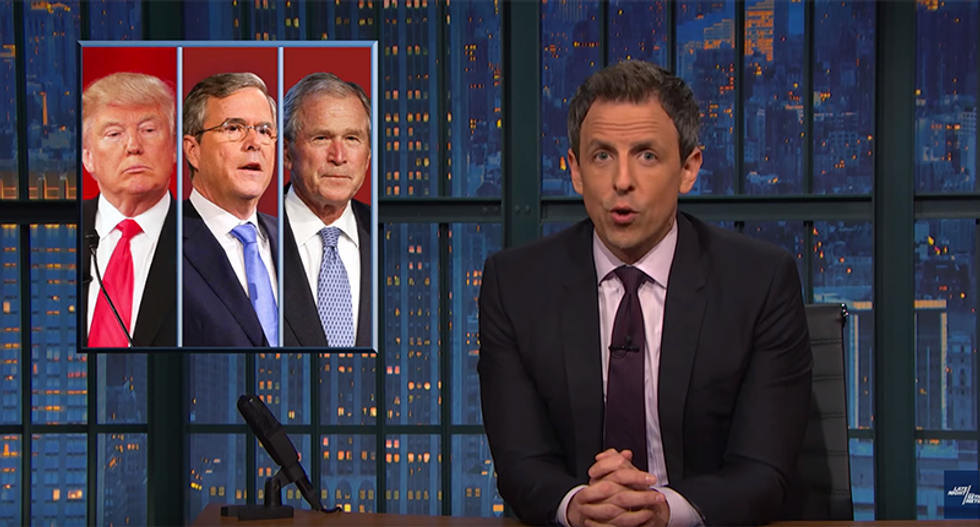 Critics have been saying for years that George W. Bush's war in Iraq was wrong but never before has a Republican running for president so emphatically said that it was a mistake. That's exactly what happened in the GOP debate this past weekend and comedian Seth Meyers said Wednesday that it is a significant evolution for the party.

The worst came when Trump reminded America that Bush was president on Sept. 11, 2001. "That's right, after months of Trump making racist comments on Republican debates he finally got booed for saying George W. Bush was president on 9/11," Meyers said. "You can't do that in a Republican debate. That's one of those things that everyone knows is true, but no one is allowed to say it out loud. Like how you're not allowed to say that when your hot cousin was studying abroad she was actually having a baby."

That's when Jeb Bush hit back. Monday, on the campaign trail, he told a crowd that he thought it was Michael Moore he was debating on Saturday. Trump refused to back down, instead lambasting George W. Bush in his press conference, saying that if Bush had gone to the beach we would have been better off. Trump claimed that Iraq has become the Harvard of terrorism. "Iraq/Harvard?!" Meyers exclaimed. "That's ridiculous! Both Bush's went there," Meyers said showing a picture of Bush 41 and 43.

Somehow, however, when Trump is right he's also wrong. "Trump has been claiming for months that he had the foresight to speak out against the Iraq War when it first started in 2003, not just later when the war turned out to be a disaster," Meyers said. "Yet, independent fact checkers have been able to find no evidence Trump was ever critical of the war before it began."

No one knows how Americans will react to Trump's comments on Iraq. "The war remains unpopular with 59 percent of Americans, with 44 percent of Republicans saying it wasn't worth it," Meyers quoted from an NBC News poll. "Still George W. Bush remains personally well liked by Republican primary voters. So, just how shocked was the GOP establishment at Trump's attack?" Meyers quoted a Republican official saying that Trump's comments will backfire, and if they don't nothing will stop him. The official is right about one thing: No one knows how this is going to impact the GOP race since it has never happened before. One voter that was interviewed said that he was leaning toward Jeb Bush but would probably vote for Trump, claiming that if Bush would only tell Trump to "f*ck off" he'd switch to Bush.

"I know you think you want to hear Jeb say that, but he wouldn't be good at it. You'd see him workin' up the nerve but then he'd lose confidence half way and bail," Meyers then tried a truly pathetic "f*ck off" to imitate what he thinks Bush would sound like.

So, Jeb Bush brought out his brother for a campaign rally in South Carolina on Tuesday, where W. attacked Trump by quoting their father saying "labels are for soup cans." No one is really clear on what that means, however. "What was happening when your dad said labels are for soup cans?" Meyers asked. "Were you tormenting Jeb with a label maker?"

Bush 43 wasn't the only one who came out of the woodwork to fight back against Trump. Former Vice President Dick Cheney appeared Monday night on Fox News saying it sounds like a statement from a liberal Democrat. Meyers cautioned Trump saying that he only threatened to shoot someone but, "Cheney actually did it."