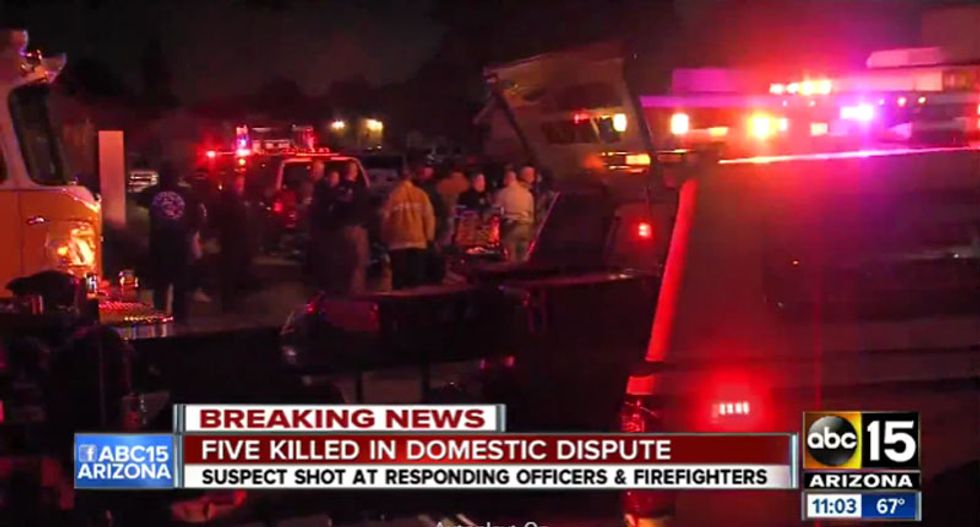 Police respond to a mass shooting in Phoenix (Screenshot)

A man shot to death four family members at a house in Phoenix early on Tuesday and died in a confrontation with police officers who entered the home, police said.

Police responded to a 911 call from a person inside the residence and arrived to hear gunshots and find part of the house on fire, said Phoenix police Sergeant Trent Crump.

Officers were forced to don fire clothes and breathing apparatus as they entered the still-burning home. Crump said that one officer was treated for smoke inhalation.

Images from the scene showed firefighters on the roof of the residence as thick gray smoke billowed out and then as a fireball erupted through an opening in the structure. Three firefighters were forced to flee from the flames.

The suspect, the adult son of at least one of those killed, was pronounced dead at the scene, Crump said.

"We have no idea what the motive is, or what sparked this," he said.

Four of the suspect's family members were fatally shot, with two of them, including a girl, dying at the hospital, Crump said.

Phoenix Mayor Greg Stanton lauded the heroic efforts of police and firefighters in responding to an “unspeakable domestic violence tragedy” as it unfolded on the city’s northwest side.

“Our prayers go out to the victims. And our city’s unending gratitude is extended today for our heroic first responders.”

The names of the suspect and the victims were not immediately released.

(Reporting by David Schwartz in Phoenix; Writing by Alex Dobuzinskis and Sharon Bernstein; Editing by Frances Kerry and Matthew Lewis)