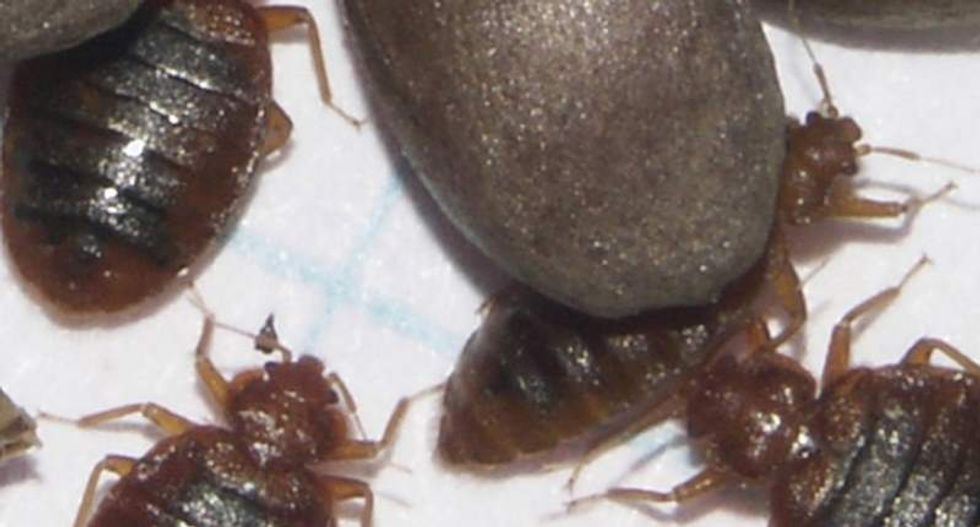 Male and female adult bedbugs in comparison to apple seeds is shown in this handout photo provided by the American Museum of Natural History (AMNH), in Washington, on Feb. 2, 2016. (Reuters/L. Sorkin/AMNH/Handout via Reuters)

They emerge from their hiding places at night, driven to slake their thirst for human blood. Vampires? No. Bedbugs!

These tiny insects have staged a global resurgence in the past two decades after being nearly eradicated in many regions, but scientists on Tuesday unveiled a complete genetic map of the bedbug that could guide efforts to foil the resilient parasite.

"This is an enormous new tool for researchers interested in controlling this pest," said George Amato, director of the Sackler Institute for Comparative Genomics at the American Museum of Natural History in New York.

"Bed bugs are now very widespread in most major cities around the world, and they have increasingly become resistant to insecticides, making them harder to control," American Museum of Natural History entomologist Louis Sorkin said.

The scientists identified genes responsible for their insecticide resistance, genes involved in mitigating the traumatic effects of their brand of copulation and anti-coagulant genes useful for an insect that makes blood its exclusive source of nutrients and water.

These genetic traits may present vulnerabilities that could be exploited with future insecticides. The genome also harbors numerous genes that originated in bacteria, including one that helps bedbugs metabolize vitamin B. This indicates antibiotics that target bacteria beneficial to bedbugs could be used to control the insects.

During mating, male bedbugs stab a V-shaped area of a female's abdomen with their sickle-shaped genitalia. Females possess genes that control a protein that makes that part of their anatomy stronger and better able to withstand this rough sex.

"Bed bugs will hide in a variety of places throughout a home. Commonly, they will be on the seams of couches and beds or hidden within the frames of furniture. They have been found in electrical sockets, in drawers or where floors and walls meet," University of Cincinnati entomologist Joshua Benoit added.

Bedbugs, found on every continent except Antarctica, have been biting people for thousands of years. Widespread insecticide use in homes after World War Two eliminated them from many regions but bedbugs rebounded by developing pesticide resistance, thriving in heated homes and hitching rides in luggage in international travel.

The research was published in the journal Nature Communications.