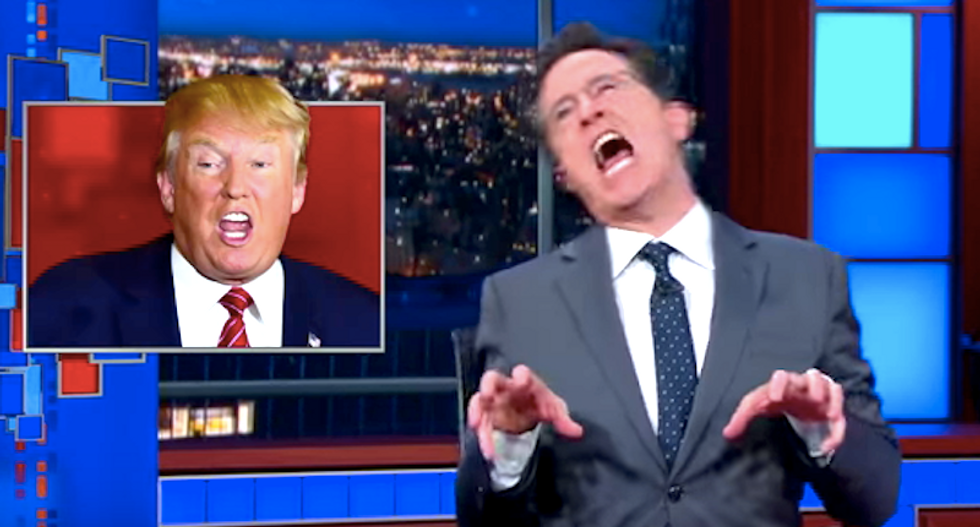 Stephen Colbert mocked the media's unwillingness to accept that the presidential race is beginning to narrow to a two-candidate field between Hillary Clinton and Donald Trump.

The "Late Night" host played a series of clips showing cable news hosts wondering whether Clinton could hold off Bernie Sanders if she continued to endure "narrow" wins like her 53-47 win in Nevada.

"I don't know how many more of these humiliating wins she can take," Colbert said. "When she announced, Hillary seemed inevitable. Now it's been almost a year (and) she's still not president? What a letdown."

Sanders claimed the results were "a triumphant defeat" and told his supporters he left Nevada with "roughly the same number of delegates as Hillary Clinton."

"Just like in the Super Bowl, when the victorious Carolina Panthers left with roughly the same number of points as Denver," Colbert said, referring to the Broncos' 24-10 victory.

He said Donald Trump declared himself the big winner in South Carolina weeks ago, and voters decided to go along with his boasts and give him the win.

Trump's victory, despite the media's efforts to portray the GOP presidential field as a competitive race, has

Colbert said he, like many others, initially thought Trump's presidential campaign was just a stunt intended to promote his reality TV show or sell more steaks.

"When he announced his intention to be president, it never occurred to me that his end game was to be president," Colbert said. "But it's time to end the denial. We, as a nation, must prepare for the very real possibility of President Donald J. --"

He stifled a bout of nausea and took a sip from his cup.

"I think I just trumped in my mouth a little," Colbert said.

He said the candidate himself was still getting used to the idea of being president.

"I can act as presidential as anybody that's ever been president, other than the great Abraham Lincoln -- I thought he was pretty hard to beat," Trump told Fox News.

Colbert joked that Trump was just being humble, saying he had a lot in common with Lincoln.

"I'm sure if he's elected, half of the country would want to secede," Colbert said.