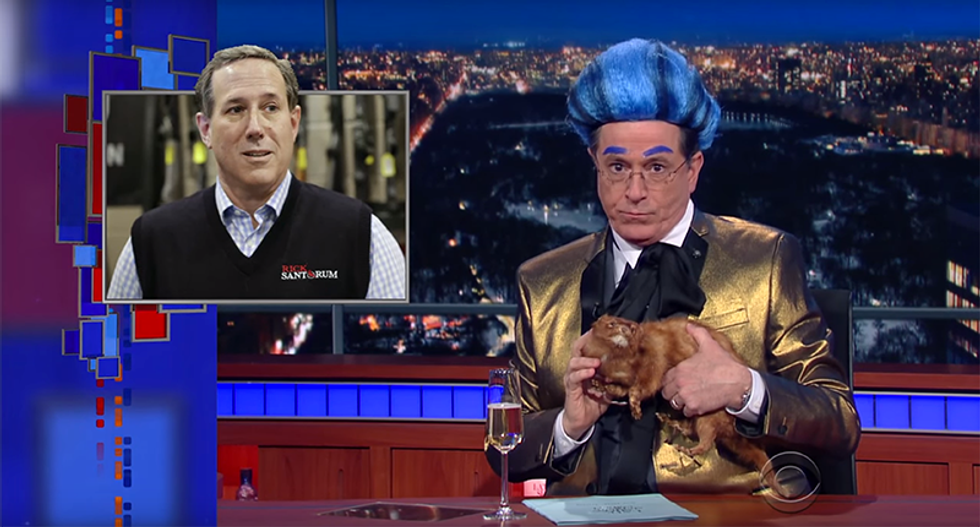 The last time the "Late Show" said goodbye to the Republican candidates who have dropped out, host Stephen Colbert forgot to include Rick Santorum in the list, so he made up for it on Wednesday night in a perfect way. With a stuffed ferret named Caligula in his arms, Colbert bid adieu to Rick Santorum, Chris Christie, Carly Fiorina, and Jim Gilmore.

Considering that Colbert forgot Santorum the last time around, he couldn't resist giving a few jabs now that the GOP "field is getting almost as small as LGBT voters for Ted Cruz." As for Santorum, "of course as a good Catholic, withdrawal is the only method he approves of." No more sweater vests.

As for Chris Christie, he really made an effort in New Hampshire, hosting 76 town halls and 180 public events. "Evidently, to know him is to him, no." Christie tried to run on a campaign of blunt outspokenness with the slogan "telling it like it is. Sadly, Donald Trump stole his thunder by telling it like a NyQuil induced fever dream."

There is also Carly Fiorina. "The voters' reaction to the former Hewlett Packard CEO was control-alt-goodbye."

Finally, there was Jim Gilmore. If you don't know who that is, you're not alone. Colbert mistakenly used a photo of a pug with its tongue hanging out. He was "a man who has, from the very beginning of the race, been the frontrunner of last place," Colbert said. He only got to 12 in the Iowa Caucus. Not 12 percent, twelve votes total. A pug with its tongue hanging out probably would have done better than Jim Gilmore.