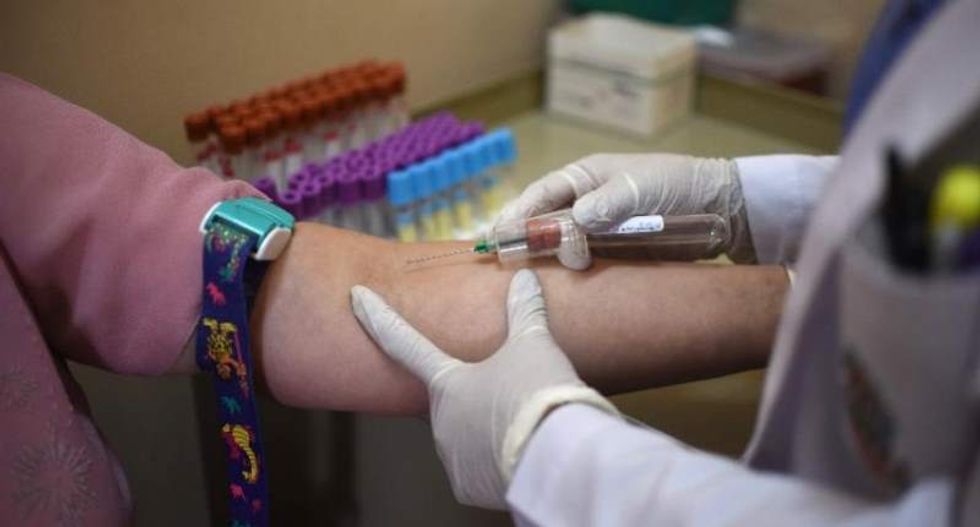 A paramedic takes a blood sample from a pregnant women in Guatemala City on Feb. 2, 2016. (Agence France-Presse/Johan Ordonez)

Texas reported a case of the Zika virus being sexually transmitted Tuesday, fueling fears over the rapid spread of the disease blamed for a surge in the number of brain-damaged babies.

With concern growing that an outbreak sweeping Latin America could spread much farther, health authorities in the southern US state said they had confirmation of the virus being transmitted by sexual contact and not just tropical mosquitoes.

That is a troubling prospect for the United States, Canada and Europe, where Zika had so far only appeared in travelers returning from affected areas.

"Dallas County Health and Human Services has received confirmation from the Centers for Disease Control and Prevention (CDC) of the first Zika virus case acquired through sexual transmission in Dallas County in 2016," said a statement.

"The patient was infected with the virus after having sexual contact with an ill individual who returned from a country where Zika virus is present," it said. Dallas county subsequently tweeted that the virus was contracted from someone who had travelled to Venezuela.

The CDC confirmed the Zika infection but did not investigate how it was transmitted, a spokesman told AFP.

Last month, the CDC said it was aware of one reported case of sexual transmission of Zika and one case of the virus being present in a man's semen after it disappeared from his blood.

Zika, which was first identified in Uganda in 1947, causes relatively mild flu-like symptoms and a rash.

But there is growing alarm over an apparent link between the current outbreak and both a rise in birth defects and a potentially crippling neurological disorder called Guillain-Barre syndrome.

Latin American countries, particularly Brazil, have reported a surge in cases of microcephaly -- which causes babies to be born with abnormally small heads -- since the Zika outbreak was declared in the region last year.

The virus is spread primarily by the Aedes aegypti mosquito, whose habitat is concentrated in the tropics -- giving temperate countries an apparent reprieve.

But sexual transmission would complicate matters.

A day after declaring the spike in serious birth defects in South America an international emergency, the World Health Organization said it had created a global Zika response unit to contain the virus.

WHO expert Anthony Costello emphasized the urgency of rapid action, stressing there was no reason to believe the crisis would remain limited to Latin America.

"We know that the mosquitoes that carry Zika virus... are present through most of Africa, parts of southern Europe and many parts of Asia, particularly south Asia," he said.

Underlining Costello's point, Thai officials announced a man had contracted the virus in the country.

The International Federation of Red Cross and Red Crescent Societies joined the WHO in declaring an "emergency," and appealed for 2.4 million Swiss francs ($2.36 million) to support its response in the Americas.

French pharmaceutical giant Sanofi meanwhile announced it had begun research into a vaccine for Zika, for which there is currently no specific treatment.

Developing a vaccine could however take years, experts say.

In Brazil, which has been hardest hit, Olympics organizers said they are concerned but downplayed fears -- one day after the government warned pregnant women not to attend the Games.

"We are sure we will win this battle and it will not affect the Games," said Rio 2016 organizing committee spokesman Mario Andrada.

The Olympics will be held in Rio de Janeiro from August 5 to 21, during the southern hemisphere winter, which means there will be fewer mosquitoes, organizers underlined.

A Dutch women's rights group meanwhile offered to send free pills to trigger an abortion to pregnant women in Latin America, a region known for its restrictive abortion laws.

"We are extremely worried that (the outbreak) might cause increasing unsafe abortions," said Rebecca Gomperts, founder and director of Women on Web.

In all, more than 1.5 million Brazilians are estimated to have been infected with Zika.

Colombia, Ecuador, El Salvador, Jamaica and Puerto Rico have all warned women not to get pregnant.

Zika panic also spread to the auto industry, as Indian carmaker Tata Motors announced it would rebrand its new Zica hatchback -- which stood for "zippy car."

A Southern California community is rallying around the woman whose home caught fire after being struck by actress Anne Heche’s car last week. Neighbors have raised more than $50,000 to support Lynne Mishele after her Mar Vista home was destroyed in the crash that left Heche hospitalized with significant burns but in stable condition. The online fundraiser set up by two neighbors over the weekend has received more than $57,000 a day after it launched. “Lynne lives with her beautiful pups Bree and Rueban, and tortoise Marley in the Mar Vista home that was destroyed this week by a car driving int...