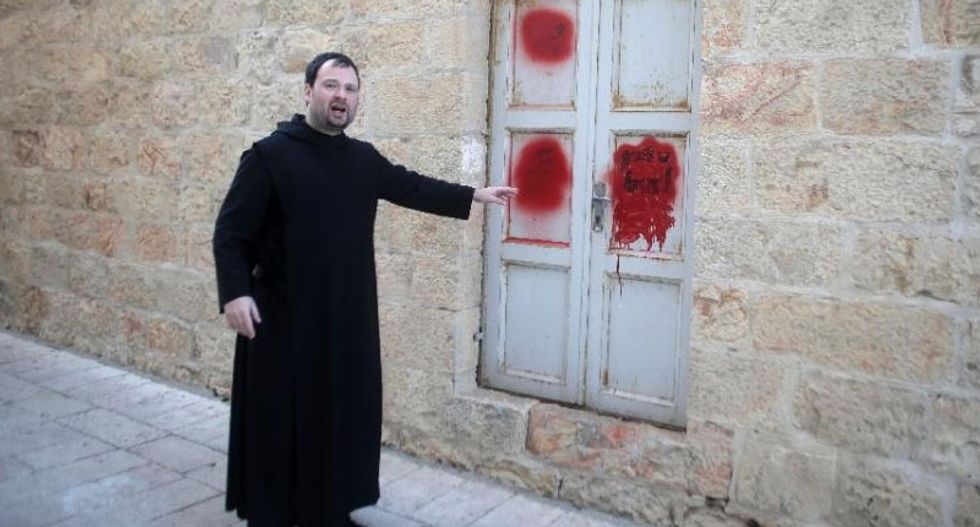 Father Nikodemus Schnabel, spokesperson of the Dormition Abbey, points towards anti-Christian graffiti in Hebrew, on the Church of the Dormition, one of Jerusalem's leading pilgrimage sites, outside of the Old City of Jerusalem, on January 17, 2016 (AFP Photo/Ahmad Gharabli)

Two are suspected of writing sectarian slogans on January 16 in the Via Dolorosa, where Jesus is believed to have walked to his crucifixion, before being joined by the third and vandalising an outside wall of the Dormition Abbey, where tradition says the mother of Jesus died.

The Benedictine abbey is on Mount Zion across from east Jerusalem's Old City and next to the site where Christians believe the Last Supper took place.

The Hebrew graffiti at the sites included "Christians to hell" and "Death to the Christian infidel enemies of Israel", the justice ministry said in a statement.

The three, aged 15 and 16, were arrested on January 20 and charged on Sunday in a juvenile court with "vandalism motivated by religious hostility and offending religious sentiment", the ministry said.

It accused the suspects of acting "to hurt the faith and religious feelings of Christians and terrorise those who live and visit the abbey complex".

Previous similar incidents, including arson and vandalism attacks on the same church, were blamed on Jewish extremists.

Vatican efforts to negotiate greater rights at the neighbouring Upper Room, where the Last Supper is believed to have occurred, have sparked opposition from nationalist and Orthodox Jews who revere part of the building as the tomb of King David.