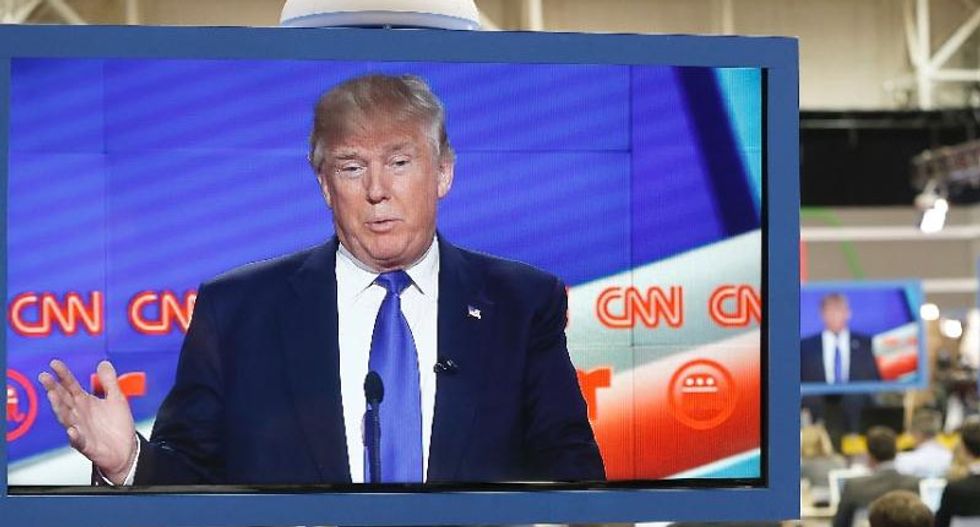 I won every one. I am building a much bigger, much stronger Republican Party. - Donald Trump

Tonight Donald Trump made a false assertion, just as he did during his Nevada victory speech when he said “We won with young.” Since he didn’t win the state’s youth vote, he did not win every group.

In fact, Trump has not had much success winning young voters. In Nevada, Marco Rubio won the youth votes. In Iowa and South Carolina, young people chose Ted Cruz. New Hampshire is the only state so far in which Trump won the youth vote.

It is worth questioning Trump’s next claim that he is building a bigger and stronger Republican Party. It is true that young Republicans participated in larger numbers than ever before in all four states in which early contests have occurred. But given young voters’ refusal to support Trump, the high levels of participation in the Republican contests so far are at least partially attributable to young voters coming out to vote against, not for, Trump.

If Trump wins the nomination, would young voters feel at home in his Republican Party and support him in the general election? Maybe, but not likely. Trump’s rhetoric and policies simply go against most young right-leaning voters’ views. For instance, young Republicans embrace immigrants as assets to this country far more than the older Republicans. More than six out of 10 hold at least some liberal views even when they identify with the Republican Party. Trump is a candidate who continues to argue for exclusion of Muslims and building of a “very, very tall” wall at the U.S.-Mexico border. He also wants to diminish the Department of Education.

Would it matter if young conservatives don’t care for Trump? Definitely. Despite a common myth, the Pew Research Center found over one-third of young people consider themselves Republicans or lean toward the Republican Party. That is approximately 18 million young voters that could support a Republican candidate. Young people were hardly mentioned in tonight’s debate by Trump, Rubio or Cruz. Kasich was a notable exception; he used his opening statement to encourage young people to “shoot for the stars.”

Young people took down Mitt Romney in 2012 because they overwhelmingly supported President Barack Obama in key states. The Republican Party made a mistake of disregarding youth vote then and it is on the same track again.

Trump is referring to Arizona’s SB 1070, parts of which have been found unconstitutional by the Supreme Court. The law awards local officials the authority to racially profile potential undocumented immigrants.

Trump is correct that the law caused immigrants to flee the state, but many critics say that’s not necessarily a good thing. Much of the bravura regarding immigration ignores how much U.S. agriculture depends on Mexican hands.

In his book Border Games, Brown University scholar Peter Andreas highlights the paradox of the extreme enforcement on the U.S.-Mexico border and the seemingly borderless economic flow of people working in the agriculture industry. And Atlantic writer Eric Schlosser, in his book Reefer Madness, exposes the hypocrisy of cracking down on undocumented immigration while exploiting the work of defenseless laborers and employing them under profitable conditions that would not be permissible with locals.

Interestingly, five years after the enactment of SB 1070, undocumented immigrants are defying the legislation. Al-Jazeera quotes Petra Falcon, founder of the Latino civic advocacy organization Promise Arizona, who says that the legislation “created this massive movement to fight back, and that was more significant than the exodus because you had protests every day … What’s come out of that is new organization and new coalitions.”

The civil rights group Puente Arizona has successfully obtained an injunction against the sheriff’s office that has halted workplace raids.

While Trump might rejoice in the reduction in immigrant numbers, it is important to consider the grimmer effects of the Arizona legislation. The Center for American Progress, a liberal think tank, has estimated that Phoenix lost US$141 million in tourism and convention industry business in the four months after SB 1070 was passed. Moreover, the notorious anti-immigration enforcement policy of Maricopa County Sheriff Joe Arpaio (an avid Trump supporter) has incurred the wrath of a federal judge, who found in 2013 that Arpaio’s department engaged in racial profiling in its immigration enforcement practices and appointed a monitor to institute reforms – a decision confirmed by the D.C. Circuit.

Finally, the Arizona legislation led almost immediately to a backlash among the Latino community, causing a five-fold increase in Latino voters registering for the Democratic Party – something that would upset even Donald Trump.

Like Franklin Roosevelt and John F. Kennedy before him, Donald Trump proves that candidates do not necessarily have to have common origins to have mass appeal. To the amazement of his rivals, Trump has proven skilled at outmaneuvering the establishment by presenting himself as the rich man’s version of Horatio Alger – something that must annoy rivals like Rubio who really do have humble origins.

Trump has been able to tap into real frustrations within some segments of the electorate. These voters believe that America is in a state of decline. They also believe that Beltway insiders overcomplicate things, lack common sense, and get nothing done.

By presenting himself as a plainspoken, take-no-prisoners and take-charge kind of guy, Trump distinguishes himself from the rest of the field. The kind of voters who are drawn to him – and by now, we need to accept that they are many – aren’t looking for specifics. They are looking for someone who promises to get things done. Critics may legitimately argue that Trump is light on specifics. But his supporters care more about affect than details. When Trump offers pat, matter-of-fact solutions, they resonate, especially when he offers up his personal success as evidence of his ability to be proactive.

Some may wonder why Trump’s own wealth has not proven to be a stumbling block. Why do working-class voters identify with him? For starters, many desire his perceived wealth more than they would criticize it. And despite the fact that Trump essentially built his wealth upon an inheritance, he does project more of a “new money” image, giving people the idea that he is self-made.

Trump has clearly figured out how to speak the language of those who are rallying around him. Until his rivals learn to speak that language, they will continue to trail him in the primaries.