Tornadoes sweep across Louisiana and Mississippi and leave damage behind them 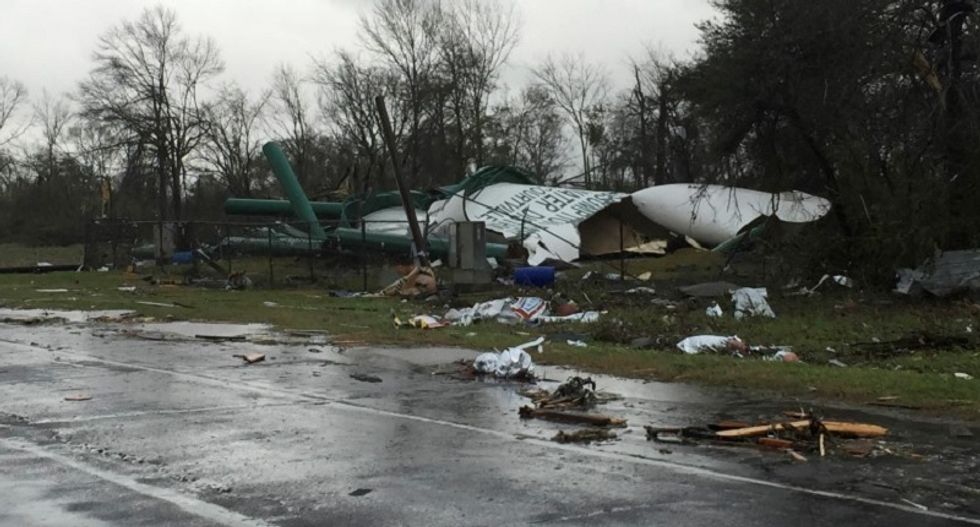 Several tornadoes cut a swath of damage across southeast Louisiana and Mississippi on Tuesday, injuring at least a dozen people, knocking down a water tower, and destroying homes and businesses, according to forecasters and emergency officials.

Weather officials were tracking more than a dozen reports of tornadoes in the region on Tuesday afternoon, said Mike Efferson, a meteorologist at the National Weather Service in New Orleans.

About 31,000 customers were without power in Louisiana, according to Entergy Louisiana, the main electricity supplier in the area.

Acadian ambulance services in Louisiana said it had transported at least 12 people to area hospitals in Assumption and nearby St. James parishes, according to the agency's Twitter feed.

Up to 20 homes were reported destroyed, and firefighters rescued residents with minor injuries from four homes, said John Boudreaux, Director of Homeland Security and Emergency Preparedness in Assumption Parish.

Residents reported damage to homes from tornadoes and golf ball-sized hail on the Mississippi Gulf Coast as the system barreled across the U.S. South, Efferson said.

"It's still going, and this system is going to continue to have a threat for tornadoes as it moves east through the night into Mississippi and Alabama," he said.

Mississippi Gov. Phil Bryan declared a state of emergency for areas expected to be affected by the storm.

Schools and government offices canceled classes or closed early in Louisiana and Mississippi as severe weather warnings lined up from Louisiana to Florida and Georgia.

The National Weather Service said Alabama could see tornadoes with damaging winds up to 70 miles per hour (113 km per hour) and golf-ball size hail into the early hours of Wednesday.

By midnight, the severe weather was expected to hit southwestern Georgia and could reach Atlanta and central Georgia before the morning rush hour on Wednesday, said Adam Baker, a meteorologist for the weather service’s Atlanta office. Some area schools announced later start times Wednesday.

One to 2 inches (2 to 5 cm) of rain were expected, although Atlanta and other isolated areas could see 3 inches or more, Baker said.

"We’re really concerned that this could catch people off guard," Baker said. "We need people to listen to weather warnings in their area."