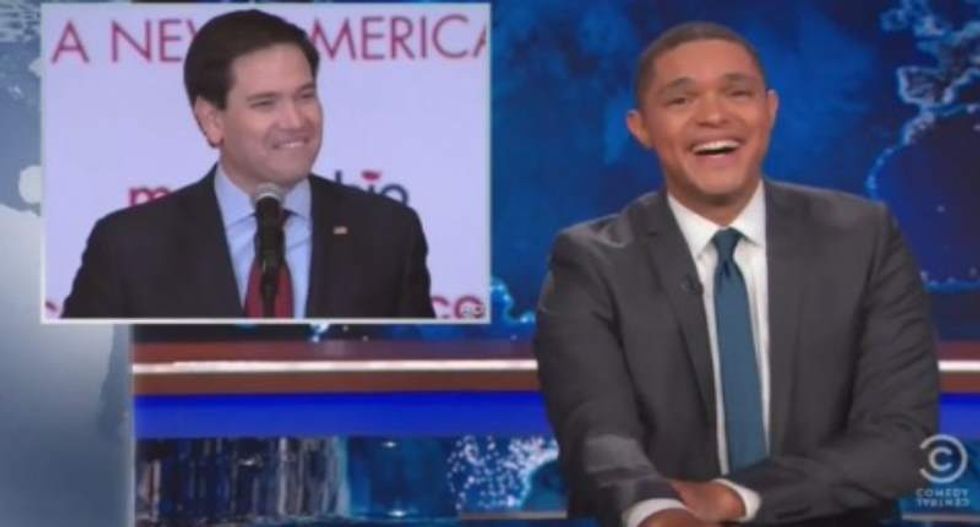 The Tea Party lawmaker, who actually came in third behind Sen. Ted Cruz (R-TX) and Donald Trump, took to the stage during the evening and boasted that he defied predictions saying he "had no chance" because of his hair or his boots.

"I don't know if that's why you have no chance, because of the boots," Noah said in response to Rubio. "I think it was because you only show up to work about two-thirds of the time. And also, you've missed more votes than any other senator, and you tried to pass immigration reform but then bailed on it once it got really tough. And then you pretended you never did. And also, you used a GOP credit card to spend $20,000 on personal expenses. But yeah, probably your boots didn't help."

As a first-time caucus observer, Noah said, it was interesting for him to see pundits gush over the "momentum" Rubio and Sen. Bernie Sanders (I-VT) enjoyed after their respective party contests despite losing. In Sanders' case, he said, he lost some precincts to Democratic opponent Hillary Clinton via coin toss. (However, as Crooks and Liars reported, earlier accounts stating that Clinton won every coin flip against Sanders were incorrect.)

But while Clinton declared victory early on Monday night -- a claim which was ultimately validated, albeit by a razor-thin margin -- Noah said that she could have taken a lesson in humility from, of all people, Donald Trump. The real estate mogul gave a graceful concession speech after Cruz's victory, which Noah said had himself and his staff waiting in vain for a meltdown.