Trump shows mellower side in days ahead of New Hampshire primary 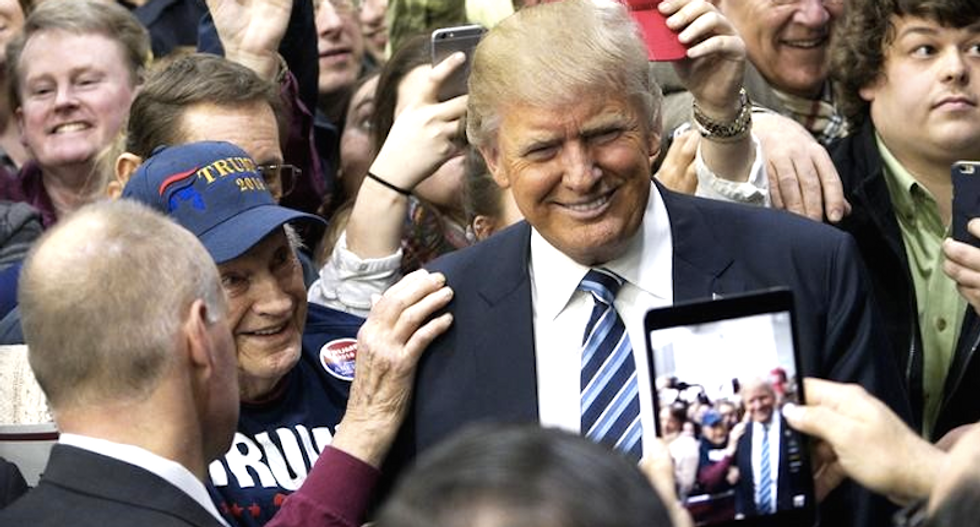 U.S. Republican presidential candidate Donald Trump poses for a photo with a supporter after a campaign rally in Plymouth, New Hampshire, February 7, 2016. (REUTERS/Rick Wilking TPX IMAGES OF THE DAY)

It was a day after he told a Republican debate audience that he did not want to leave poor people “dying in the streets,” and won praise by some pundits for delivering a restrained performance in which he largely avoided skewering his rivals.

It is not as if Trump, notorious for his inflammatory, demolition-derby style, has suddenly gone soft. At the same event in Plymouth, he reaffirmed his support for reviving the waterboarding of terrorism suspects and, if necessary, doing “much worse.” He mocked “poor Jeb Bush” and talked about the “stupid people” running the government.

But the past week has revealed a mellower Trump who seems less interested in slashing and burning his way to his party's nomination for the Nov. 8 election and more willing to view his competitors with equanimity.

His campaign has been working to moderate his image, showing another side of the boastful billionaire businessman whose candidacy has alarmed the Republican establishment and been marked by calls for the deportation of illegal immigrants and temporarily banning Muslims from entering the United States.

The effort began in earnest in Iowa, when Trump brought in an evangelical leader as a character witness, used his children as surrogates and stood on stage with his wife, Melania, who has been rarely seen on the campaign trail.

He told Reuters in Iowa he was nervous about the result of the caucuses, where he ended up second to Ted Cruz, the U.S. senator from Texas, in the first of the state-by-state nominating contests.

Ahead of New Hampshire's pivotal primary on Tuesday in which Trump leads in opinion polls, he has shared painful personal stories, stopped at diners to shake hands with patrons, and tried sending the message that despite his massive wealth and brash manner, he is a regular Joe.

Trump even admitted on CNN on Sunday that Saturday’s debate was “a lot of pressure.”

“He’s much more of an ordinary guy than (voters) would ever expect,” Trump’s son, Donald Trump Jr., said at a campaign stop in Tipton, New Hampshire. “He’s a down-to-earth guy.”

New Hampshire voters have rewarded candidates for emotional directness before. In 1992, they gave Democrat Bill Clinton’s flagging campaign new life when he went on television with his wife, Hillary, amid denied having an extramarital affair.

Sixteen years later, they handed Hillary Clinton a much-needed win after she broke down at an event and cried. The blunt-spoken Republican John McCain won the state's primary twice, in 2000 and 2008.

Despite leading in polls in several early voting states, Trump could use some image enhancement. National polls almost uniformly show that more than 50 percent of Americans view him unfavorably.

During his last weekend in Iowa, Trump abandoned his usual campaign format in which he stands a podium and addresses the crowd in favor of a sit-down with Jerry Falwell Jr., son of the late evangelical activist, in which Trump answered his questions with little bombast.

Falwell vouched for Trump’s generosity, telling of a couple who helped Trump after his limousine broke down in rural New York and how he in turn paid off their mortgage.

At those events, Trump made a show of presenting a giant fake check, sweepstakes-style, to groups that aid disabled veterans.

“I watch all these candidates,” he said of his rivals. “I’m nicer than all of them.”

In New Hampshire, Trump has opened up about the loss of his older brother to alcoholism in 1981.

Trump picked up that thread on Sunday in Plymouth, saying: “We’re going to take the people who are badly addicted. We’re going to work to make them better.”

Trump’s motorcade stopped earlier at a diner in Manchester, where he greeted star-struck patrons, drank hot chocolate and ordered eggs and bacon.

During his appearance in Plymouth, he barely mentioned his competitors and did not mention building a wall along the border with Mexico until someone in the crowd shouted it out.

He also resisted taking aim at Marco Rubio, the U.S. senator from Florida, whose faltering performance at Saturday's debate seemed tailor-made for the back of Trump’s hand.

Instead, Trump told the audience: “I love you folks. You’re amazing people.

"On Tuesday, go out and vote,” he said, adding with a grin: “If you’re not going to vote for me, do not vote.”