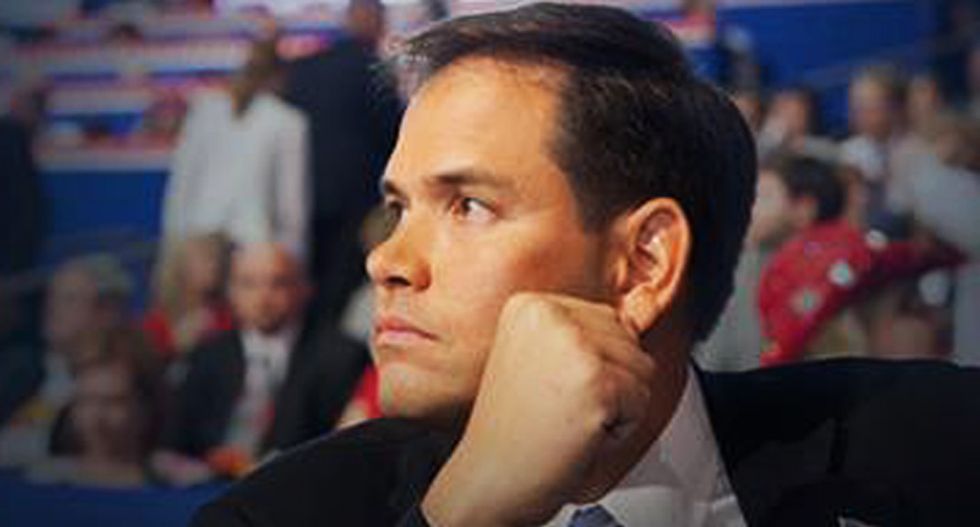 Broadcast networks called the state for Trump almost immediately after voting ended, with the state Republican Party confirming the victory soon after.

With returns still being tabulated, U.S. Senator Marco Rubio of Florida was in second place, with Ted Cruz, a U.S. Senator from Texas, coming in third.

Trump's decisive win is likely to further frustrate Republican establishment figures who, less than a month ago, were hoping that the outspoken billionaire’s insurgent candidacy was stalled after he lost the opening nominating contest in Iowa to Cruz.

But since then, Trump has tallied wins in New Hampshire, South Carolina, and now Nevada, with a suite of southern states ahead on March 1, so-called Super Tuesday.

Polls suggest Trump will do well in many of those Super Tuesday states, placing further pressure on Cruz, Rubio, and Ohio Governor John Kasich, another presidential candidate who was not a factor in Nevada, to come up with counter-measures quickly.

“These guys have to figure out how to turn their fire on Trump,” said Ford O’Connell, a Republican strategist in Washington. Absent that, he said, “Which one is going to get out of this field?”

In the run-up to Nevada, most of Trump’s rivals left him alone, preferring to tussle with each other in a bid to be the last surviving challenger to the front-runner.

Not long after Trump’s win was certified in Nevada, Cruz’s campaign released a statement criticizing Rubio for not winning the state, but did not mention Trump at all.

Rubio, who has emerged as the Republican establishment’s favorite to derail Trump’s progress, can take some solace in finishing second. But that also has to be viewed as somewhat of a setback considering that he had frequently campaigned in Nevada, having lived there for years as a child. A Cuban-American, he had attempted to rally the support of the state’s large Latino population.

Rubio had also benefited from the departure Saturday of Jeb Bush, the former Florida governor, from the race. That brought an influx of new funds, a bevy of endorsements, and a wealth of media attention. But none of it was enough to overtake Trump.

As for Cruz, he is facing mounting questions about the viability of his campaign. After Cruz’s Iowa win, Trump has made serious inroads among his core base of conservative supporters, draining anti-government hardliners and evangelicals.

Cruz attempted to appeal to Nevada’s fierce libertarian wing, appealing directly to those who supported local rancher Cliven Bundy’s armed protest against the federal government in 2014 and a similar more recent one staged by Bundy’s sons at a federal wildlife refuge in Oregon. But that, too, was not enough.

The upcoming March 1 primary in his home state of Texas is looming as a make-or-break moment for him.

Despite early reports on social media of procedural irregularities at many Nevada caucus sites, the Republican National Committee and the party’s state chapter said voting ran smoothly. Higher-than-normal turnout was reported, although historically, few of the state’s citizens participate in the Republican caucus.

Nevada’s contest had been viewed as a test of whether Trump had organizational might to match his star power. Unlike primaries, caucuses are more dependent on the abilities of campaigns to motivate supporters to participate. Trump’s failure to do that in Iowa was viewed as contributing to his defeat there.

He had no such problems in Nevada. And he is expected to win the bulk of Nevada’s 30 delegates, That would give him more than 80 before February ends, dwarfing the tallies of Cruz and Rubio.

While more than 1,200 are needed to secure the Republican presidential nomination, Trump has built a formidable head start.