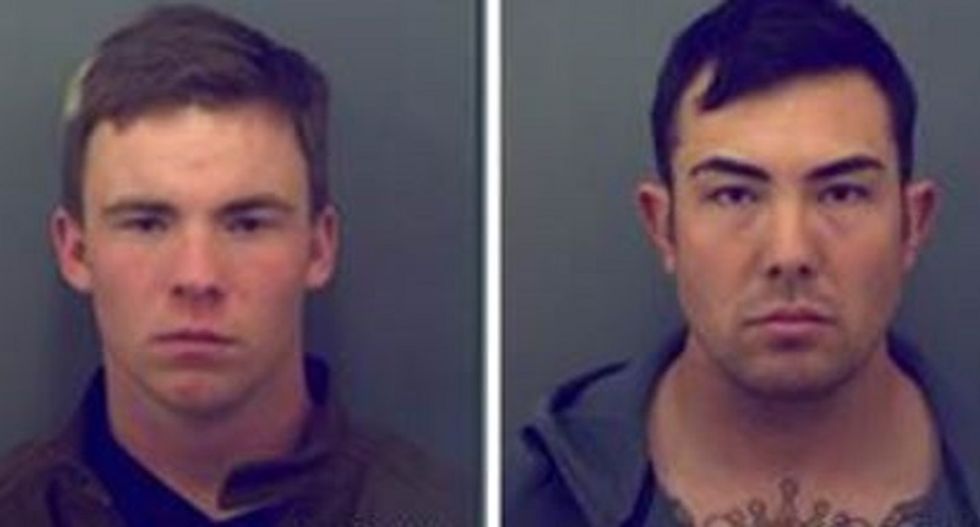 Two U.S. Army soldiers have been arrested and charged with the killing of a 16-year-old boy, according to the El Paso Times.

Tyler Shane Hall, 20, and Eric Duvall, 25, were arrested this week after the boy's body was found on Sunday. The men are accused of killing the teen, Michael Anthony Tapia, over a drug theft then boasting about it later, the Times reports.

The killing was a retaliation for drugs that were stolen from Hall. A witness told authorities he believed Tapia had stolen them. The two men confronted the boy at a home, where Tapia told them he would pay them for the drugs, a witness told police. The men responded, "We'll fix this right now," then forced him to leave with them.

When they returned about an hour and a half later, Tapia was not with them.

The witness says Hall was laughing afterward and said he had murdered the boy with an "AR rifle" and shot him in the head twice. Tapia died from a single gunshot wound to the back of his neck, according to an autopsy report.

According to KFOX14, Hall was carrying a green and black AR-15 when he returned.

“I shot him in the head," Hall allegedly said, according to a witness. "I did a double tap on his head.”

Both soldiers are on active duty and stationed at Fort Bliss. Both men are being held in El Paso County on $1 million bond.

“To the murderers that took my sons life, I pray mercy on you now,” Tapia's grieving mother, Johanna Ochoterena posted on Facebook. “God is a good God. My son is with our Lord now, and I know he is ok and home. Justice will be served!”