US weighs options as Islamic State presence soars in Libya 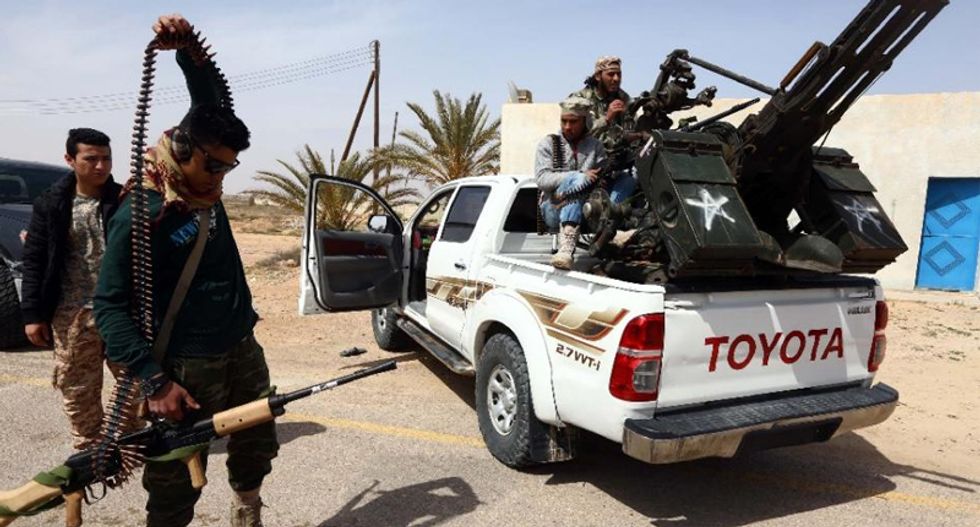 Islamic State fighters have streamed into Libya in recent months, a US official said Thursday, heightening fears the extremists are gaining ground and influence in the north African country.

About 5,000 IS jihadists are now in Libya, the defense official said, approximately double earlier estimates, while the number of IS extremists in Iraq and Syria has dropped.

The updated tallies come as the administration of President Barack Obama faces growing calls for the US military to step up action against the IS group in Libya, where the jihadists have already seized the city of Sirte and an adjoining length of Mediterranean coastline.

NATO defense ministers are meeting in Brussels next week to evaluate the ongoing US-led coalition campaign against the IS group and to discuss ways of redoubling efforts.

Patrick Skinner, a former CIA case officer now with The Soufan Group consultancy, said the United States has few good Libya options, but there is growing consensus something must be done.

"They are just terrified of it getting much worse, fast," Skinner told AFP.

"Once the Islamic State takes something, it's really hard and really bloody and really expensive to take it back."

But there are growing fears about the fate of Libya, which has been in chaos since the NATO-backed ouster of longtime dictator Moamer Kadhafi in 2011.

Skinner pointed to the irony of Western leaders now scrambling for solutions in Libya.

"The international coalition is going to air-strike its way out of the chaos created by air strikes," he said.

"That's actually what people are considering. Something has to be done. The horrible reality is: what is that something?"

IS fighters have capitalized on Libya's disarray and spread the group's influence into the north African nation, establishing a stronghold in Sirte, Kadhafi's hometown.

Life in the city, which IS fighters seized in June, now resembles that of other towns flying the jihadists' signature black flag. Witnesses have described public executions and say women are no longer allowed outside without a male guardian.

Reluctant to see its 18-month air campaign against the IS group in Iraq and Syria spread to a third country, the United States has repeatedly stressed the importance of finding cooperative local partners to help fight IS in Libya.

Washington has also pushed international allies -- especially former colonial power Italy -- to take the lead in any coalition operations there.

"We appreciate the leadership they've shown. We appreciate their contributions to the coalition to go after Daesh," State Department spokesman John Kirby said, using an Arabic abbreviation for the IS group.

US diplomats have also said any actions in Libya must be carried out alongside a functioning and unifying government.

Libya has had two rival administrations, with the recognized authorities based in the country's far east and a militia-backed authority in Tripoli since the summer of 2014.

- Ease of travel to Libya -

The decrease of IS fighters in Iraq and Syria is due to successes in the ongoing US-led air campaign and the relative ease of traveling to Libya from north African countries, the US official said, speaking on condition of anonymity.

White House spokesman Josh Earnest confirmed the latest tally for Iraq and Syria, based on a new intelligence assessment.

Islamic State fighters "continue to be a substantial threat, but the potential numbers have declined," he said.

And in December the Pentagon acknowledged that a group of US special operations troops who traveled to Libya to "foster relationships" was kicked out of the country soon after arriving.

Michael O'Hanlon, a senior fellow at The Brookings Institution, said it's difficult to work with "moderate" militias, as illustrated in Syria, where a hodgepodge of armed groups are pursuing rival goals that don't always align with America's.

"I would expect Obama to go slow on this latter matter in Libya, just as he has in Syria," he said.

"But I think he will quite likely use airpower -- and perhaps the occasional commando raid -- if there is reason to think that can contain or modestly weaken IS."