Video catches man's gun-waving road rage threat: 'You're all about to f*cking get shot' 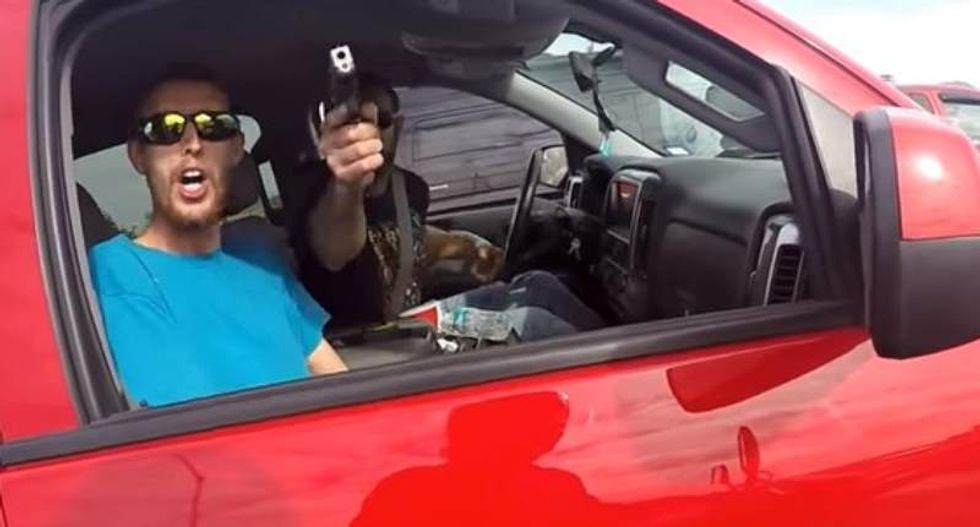 A Nevada man was counting his blessings after recording an alarming encounter with an unidentified motorist who pulled a gun on him and threatened his life, KTNV-TV reported.

While refusing to divulge his identity, the man posted the encounter online on Saturday. He later told KTNV, "This was literally the first and last time that I will ever go up to somebody's window and confront them. I could have ended up dead. I have a wife and kids that I want to come home to."

The footage was shot while the man was riding with a group of motorcyclists in Henderson, Nevada. The group can be seen riding in one lane as the other motorist, driving a pickup with Texas license plates, drives in the other lane. The motorcyclist states in the video that the passenger in the pickup flipped him off, prompting him to approach the pickup at a stoplight.

After the motorcyclist taps on the pickup's passenger-side window, the passenger can be seen getting the driver's attention and gesturing. The gun is visible as the window rolls down, with the passenger saying, "Get that go*damn gun out, motherf*cker."

The driver immediately points the gun at the motorcyclist, who is apparently unarmed, yelling, "Get the f*ck away from me." When the motorcyclist asks why they flipped him off, the driver and passenger both accuse one of the other group members of crossing traffic wildly.

"You're all about to f*cking get shot," the passenger yells. Seconds later, a caption on the video denies the accusations coming from the pickup.

No one was injured during the incident, which is under investigation by Henderson police.

The motorcyclist later told KTNV that he was in the wrong in approaching the vehicle.

"No matter how big and bad you are or how much weight you lift, there's always somebody that's bigger and 'badder' than you are that will put you in your place real quick," he said.

KTNV's report can be seen below.

The motorcyclist's original video, as posted online, can be seen here.